I’ve spent hours searching for a commercially-made router bit that has the right dimensions to cut the dovetail slots in a traditional reed pan. It needs to be an unusually small diameter, but if you want to be able to cut the top slots after installing the chamber side walls as it was done originally (some of them undercut the walls), it needs to have a disproportionately long ‘neck’ between the cutter and the shank. On the plus side, the slot is quite shallow so the neck doesn’t need to be ridiculously skinny. In the end I decided to make my own.

I started with a piece of 1/4″ silver steel. After putting it in a collet and facing the end, I used the side of a threading tool to turn the tapered section, being careful to produce a sharp corner without significantly reducing the diameter of the base of the cone. I made it just long enough to be able to cut a 2mm deep slot, to avoid weakening the neck section unnecessarily. I set the tool holder over to produce the desired 60° taper: 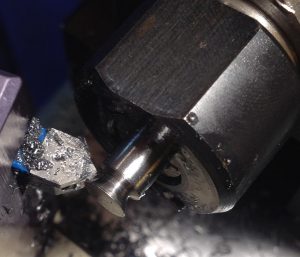 Next I extended some more stock from the collet and turned the ‘neck’. On my first attempt, swarf obscured my view of the work and I accidentally retracted the carriage too far to the right and put a groove in the cone area. There was no option but to start again! The second time, I used the tailstock as a right-hand carriage stop to protect the cone. 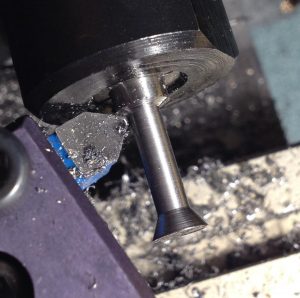 The trickiest part of making your own router bit is producing the flutes without a special tool cutter/grinder machine. I cut three helical flutes by hand with a very small triangular saw file, then hardened and tempered it and sharpened the edges with diamond needle files: 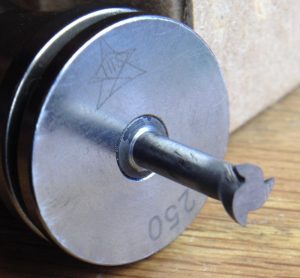 Unfortunately it didn’t work well at all. It splintered the surface badly, then overheated: 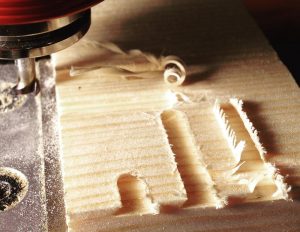 Back to the drawing board. I studied a lot of photos of commercial dovetail router bits on Google Images and came up with a very different two-flute shape. Here’s a quick clip of me filing the relief angles on the second router bit with my saw file (click to stop it after you’ve seen it once, because the Instagram player auto-repeats):

And this is the finished bit, after heat treatment and sharpening. The thing it’s inserted into is one of my milling machine’s quick change tool holders: 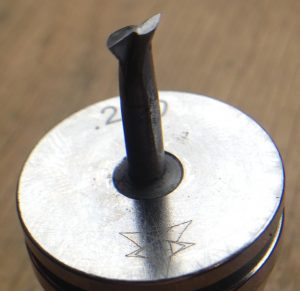 This photo shows the reason why it needs a long neck (I made it a bit longer than would have been necessary for this Treble English, in case I want to make an instrument with deeper bass reed chambers at some point): 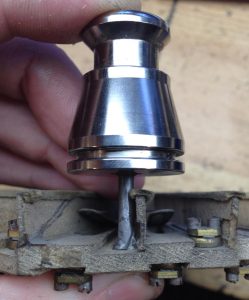 The second router bit works pretty well. Here’s a clip of it cutting a reed slot in a piece of scrap pine:

Programming the CNC mill to machine the slots is surprisingly complicated. The CAM software I’m using doesn’t understand how to cut a pocket with a tool that can’t plunge straight the workpiece and needs to enter and leave the edge of the material. I found a way to trick it into doing what I need, but the entire process filled nearly two pages of my logbook, and I need to do it all again for every size of frame I need to cut! 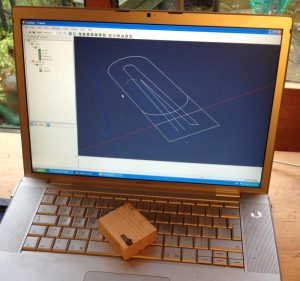 Another problem I ran into is that the outer dimensions of the antique Lachenal reeds I’ve been copying are a bit variable. Not by much, but a tenth of a mm change in width makes the difference between a snug fit and a loose one. This one fits very well – I can throw the block of wood in the air and catch it and the reed is still nicely seated – but the reed taken from the slot next to it (nominally the same frame size) is loose enough that it would fall out. I think when the instrument was built, somebody must have spent a while individually fitting each reed to its slot. Luckily my CNC mill (which I’m using for both the frames and pans) is repeatable to tight enough tolerances that I shouldn’t have this problem. 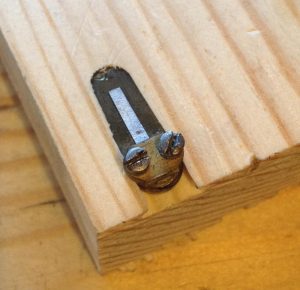