My latest concertina is a new, slightly smaller and lighter version of my Blackbird Anglo. It is a 30 button C/G with a low D drone in a 5 3/4″ (146mm) wide frame.

The French polished Amboyna burl really glows, and the black trim sets it off nicely. Although you can’t see them very well here, the Ziricote handrails have really pretty grain too. 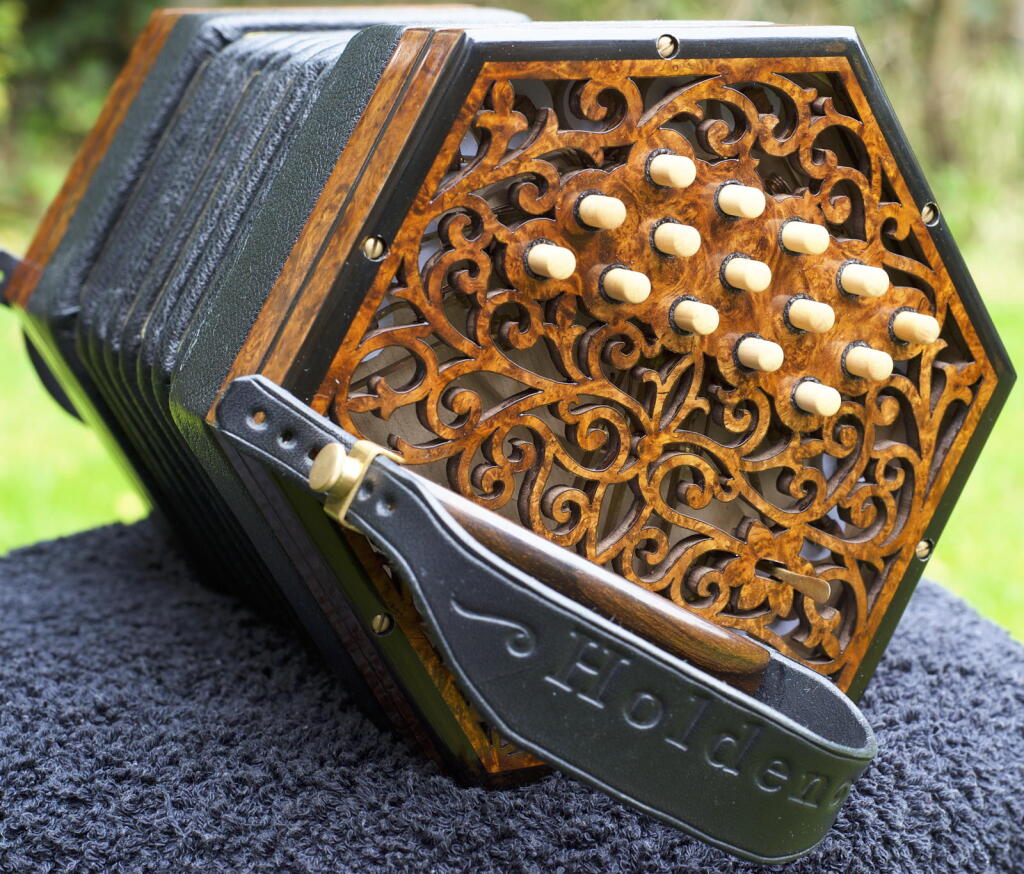 The artwork for the very fancy custom golden dragon bellows papers was drawn by Sue Mason. 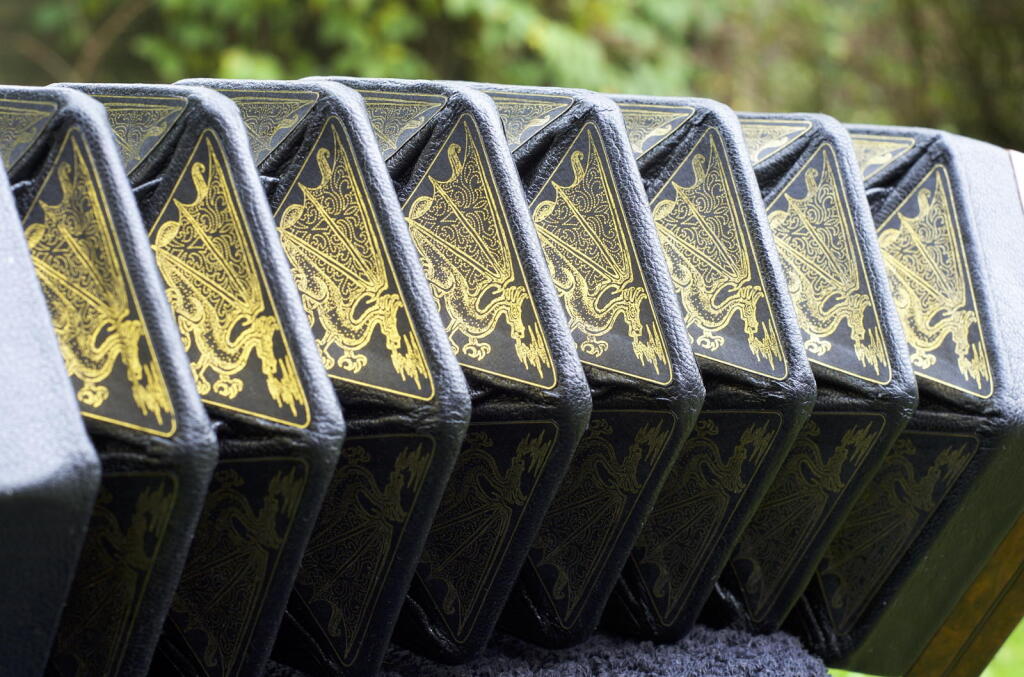 I had the hot foil printing plate made using the etched copper process because it can hold finer details than magnesium plates. The wing patterns are based on my end plate fretwork design. 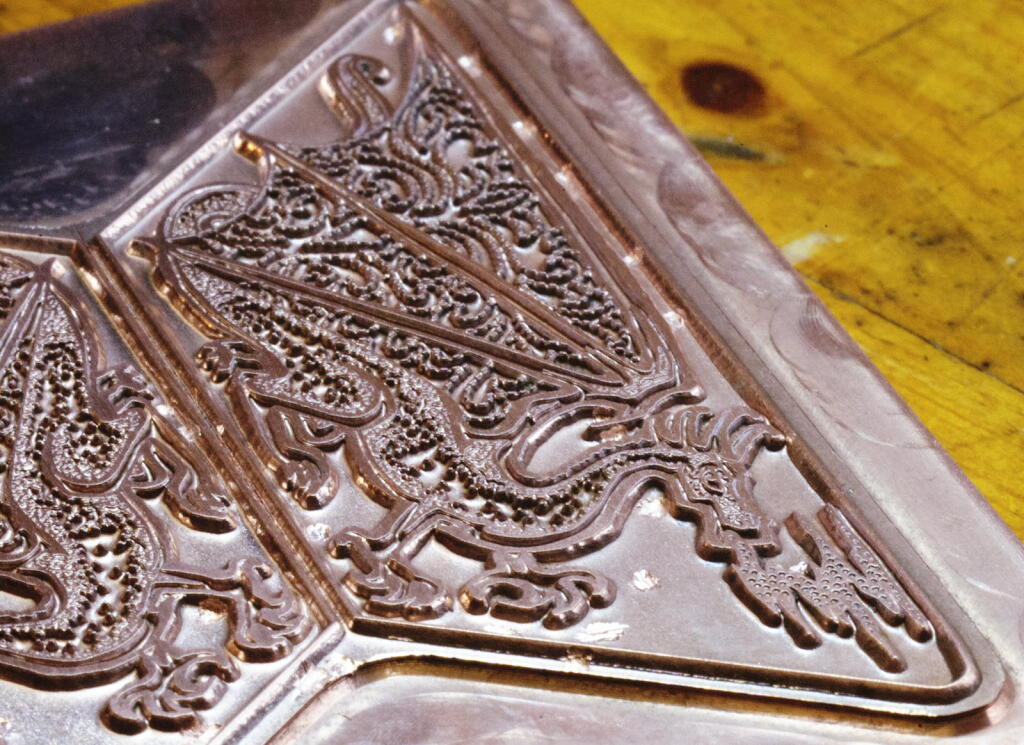 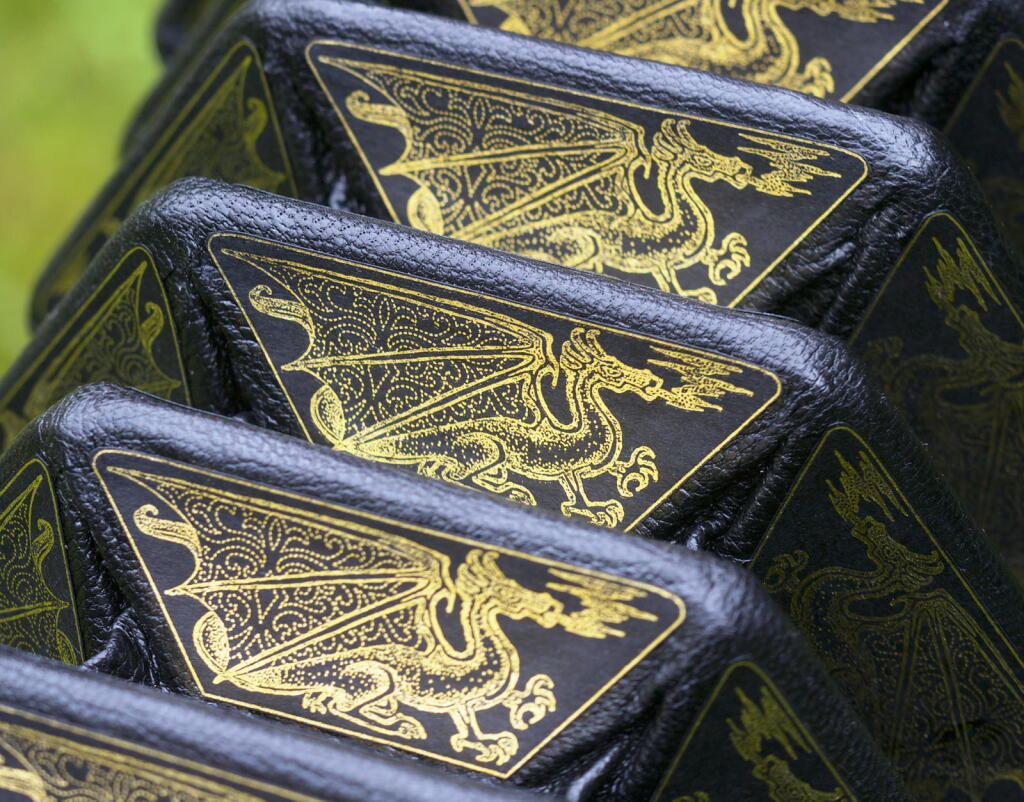 A unique feature of this instrument is the experimental drone configuration (the large L shaped chamber and long narrow reeds in the next two photos), intended to make the note sound more quietly than the rest of the instrument without badly affecting its performance in other ways. This has proven to be a thornier problem than you would expect. Simply making the reeds smaller or choking the air passage has undesirable side effects. I think the experiment was mostly successful – it is quieter and still starts quickly and uses air efficiently without having an excessive amount of pitch instability, though its tone is rather different and the large chamber took up quite a bit of the limited reed pan space. Because I didn’t have room to include a conventional thumb hole for removing the pan from the bellows, I instead fitted a short leather strap attached to a brass ring in the tiny bit of unused space I had left. 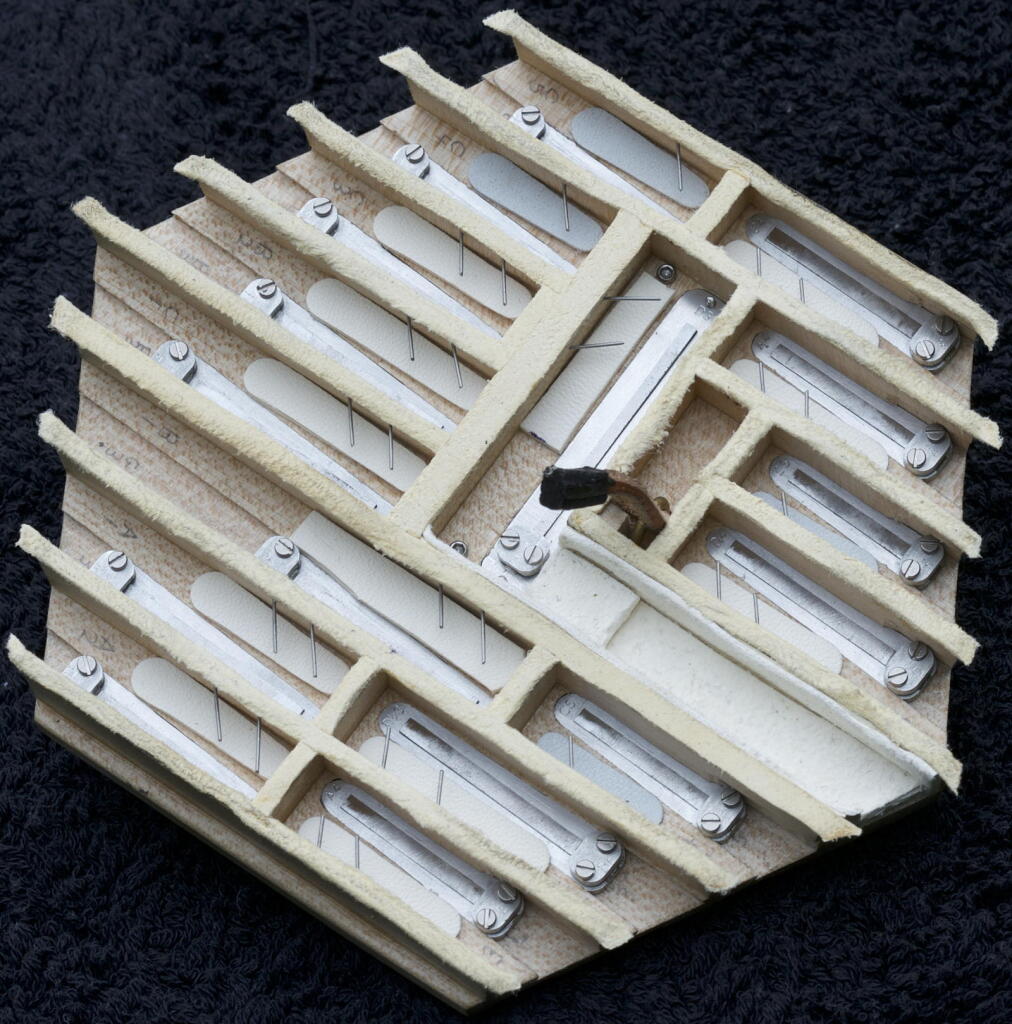 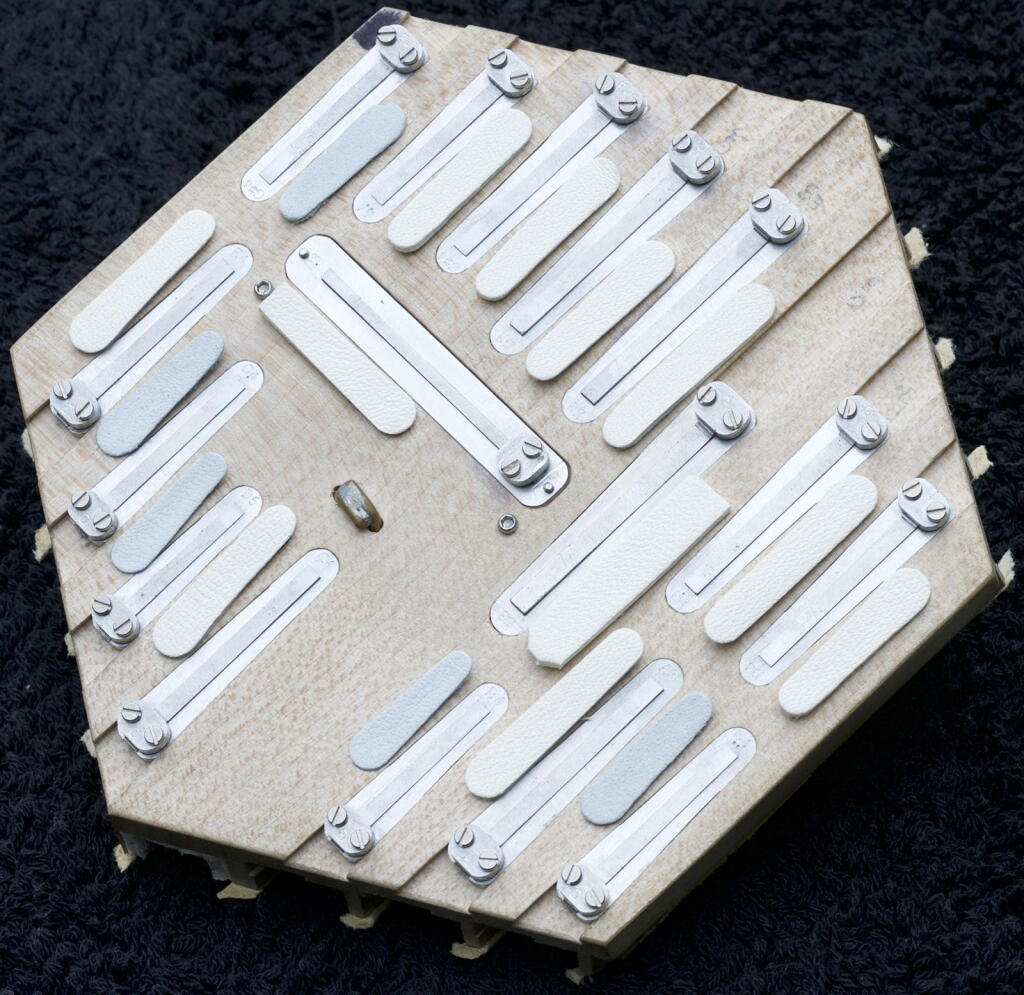 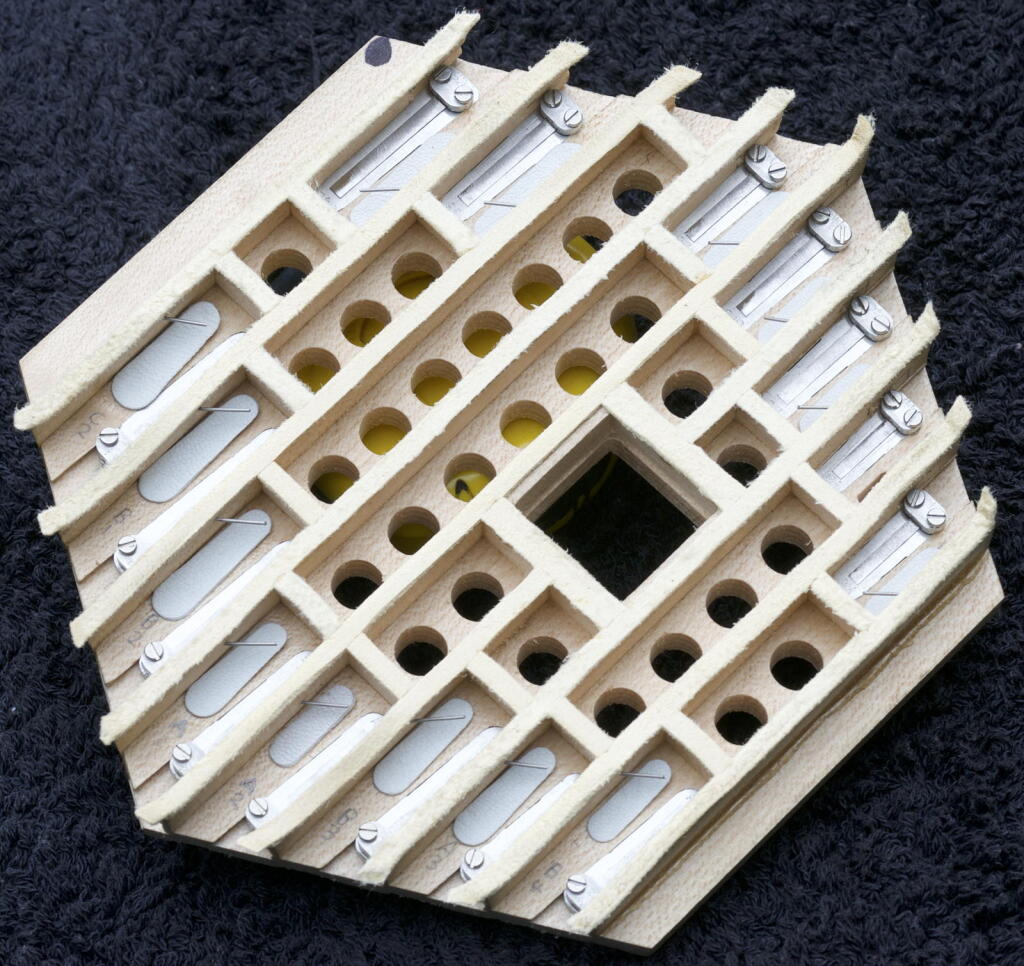 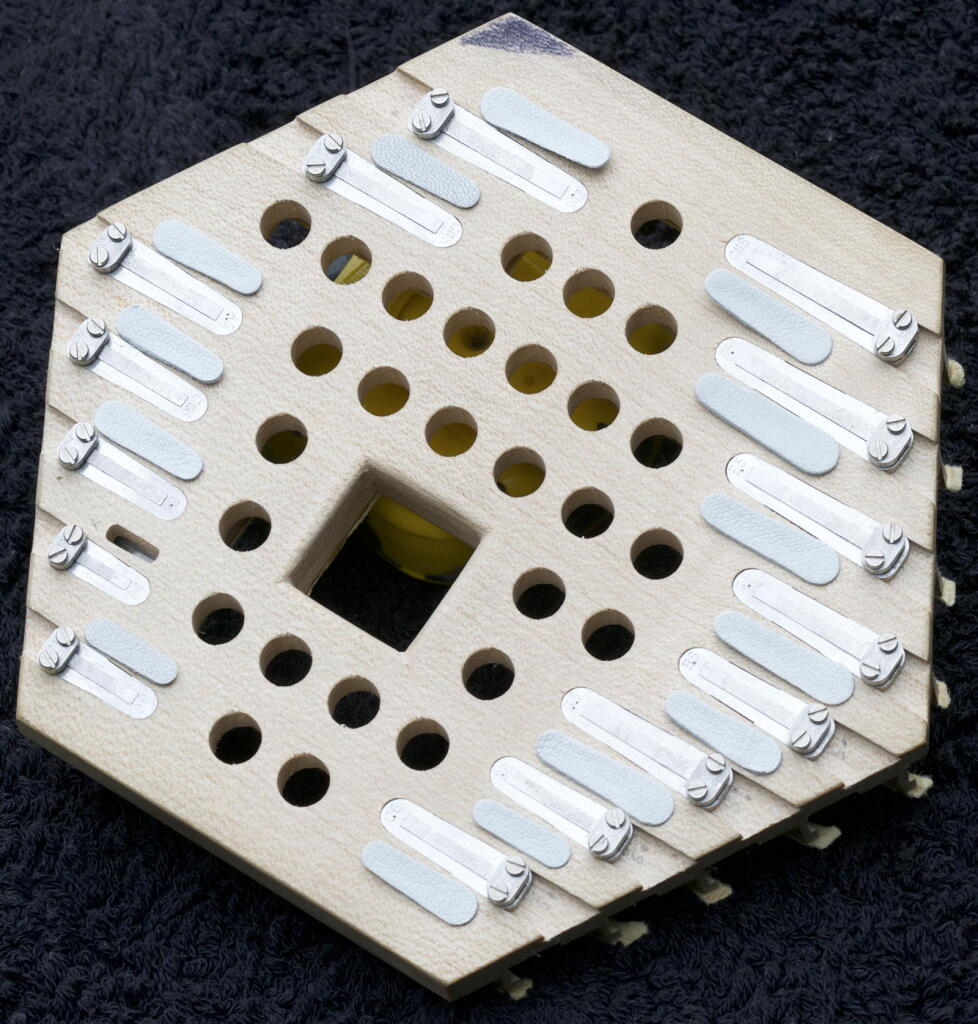 Here you can see the mechanism I came up with for the left thumb (drone) lever. It uses a secondary lever to redirect the angle of the action otherwise you would have had to push the lever in an odd direction to operate it. 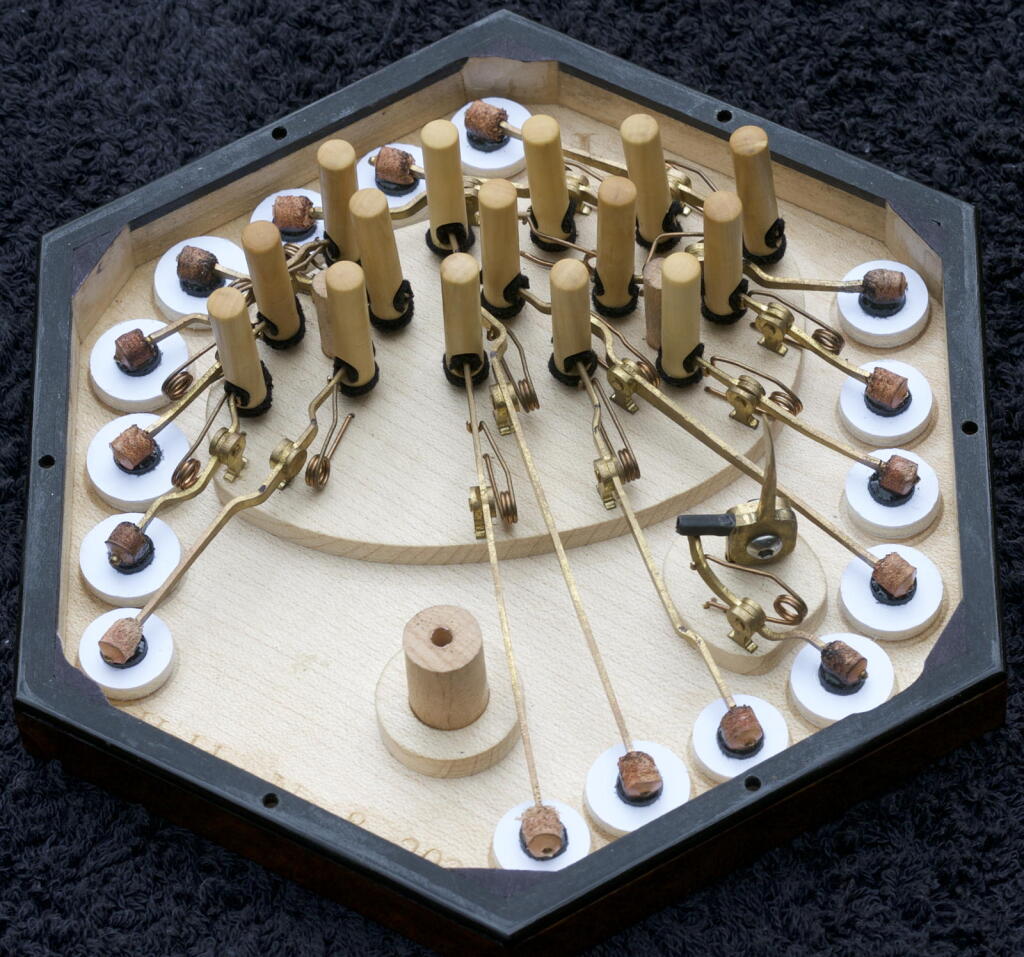 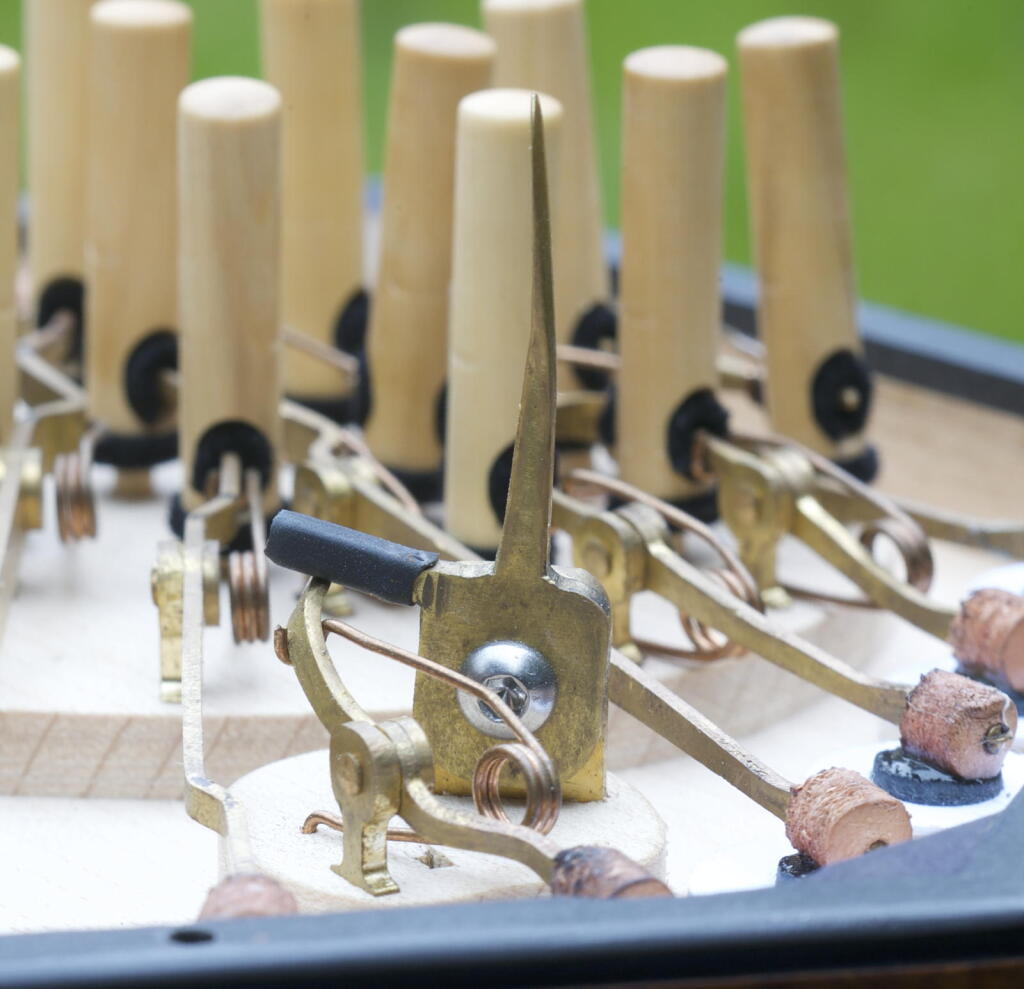 The right thumb (air release) lever similarly operates on a secondary lever to alter the direction of the action. The tricky part of this one was that it had to pass over four other levers to reach a good location for the air pad. I was surprised by how much I like the feel of this lever compared to a conventional air button; it’s almost effortless to press, and it gives you very fine control over the air release, from a gentle whisper to a huge gulp. 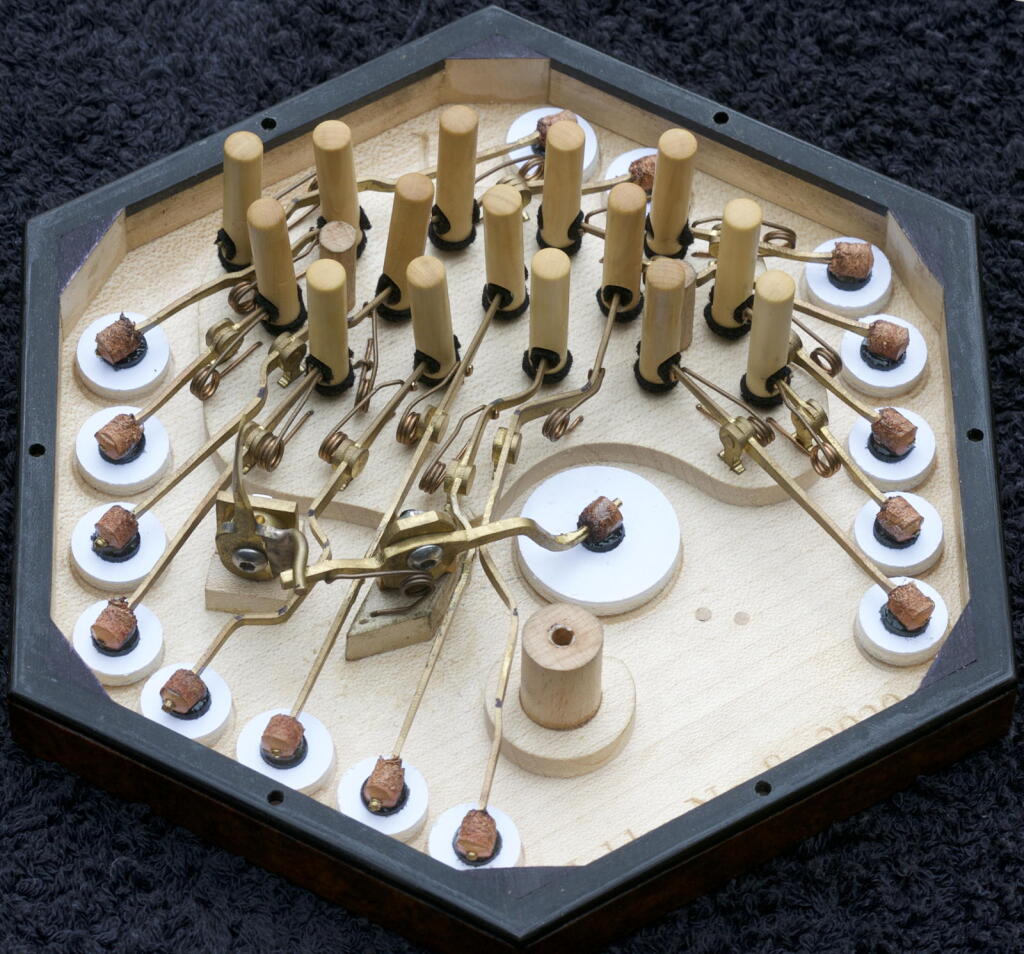 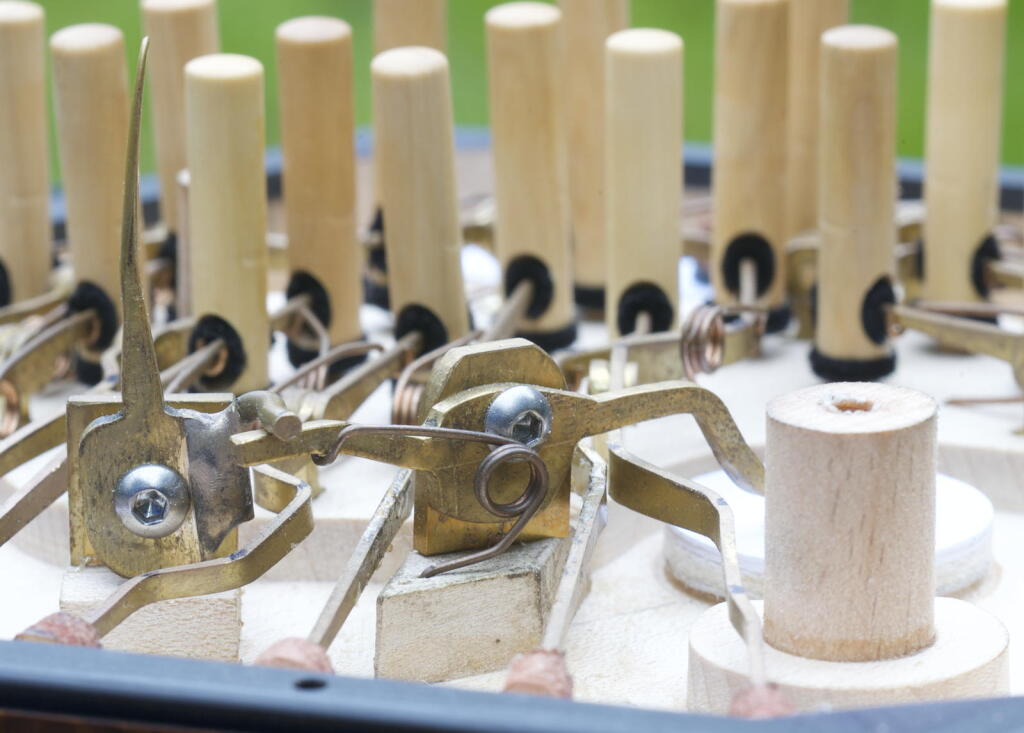 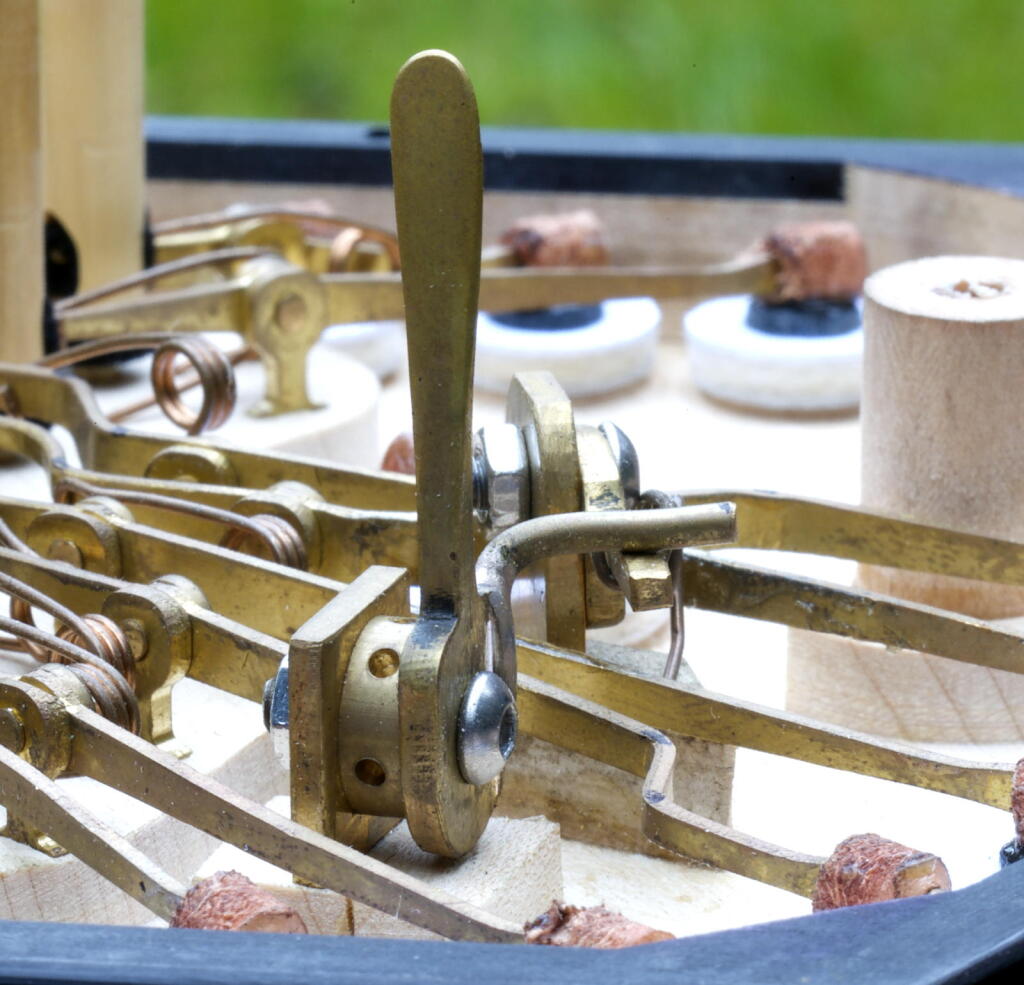 Here is a video of my client playing The Prince of Hess’s Rigadoon on the instrument, only a year after beginning to learn to play an Anglo concertina. Her concertina tutor (also the arranger of the tune) is Cohen Braithwaite Kilcoyne.