My twelfth concertina was a special 40 button Maccann Duet with some custom ergonomic features.

My client’s primary aims for this bespoke instrument were that it should be light, fast, and easy to play, with some special ergonomic requirements including tall adjustable-position handrails, low buttons, and a limited number of keyboard rows. Its smaller than usual range for a duet was partly based on how many rows he felt he could comfortably reach, and partly to keep down the overall size and weight without compromising on sound or playability. I believe I was very succesful in meeting his requirements. 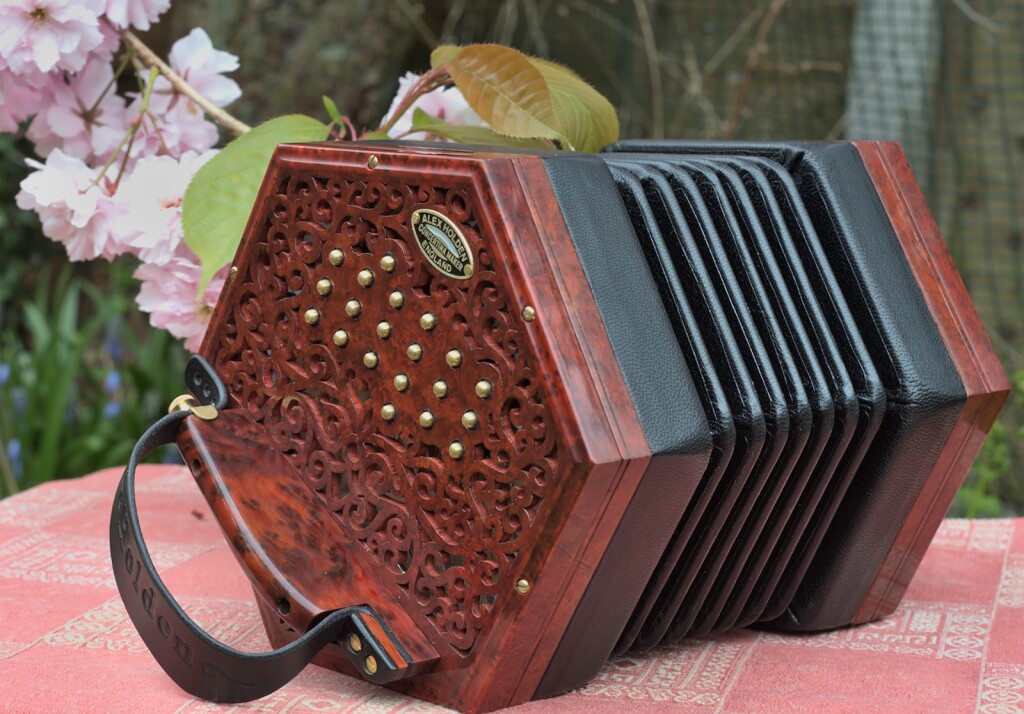 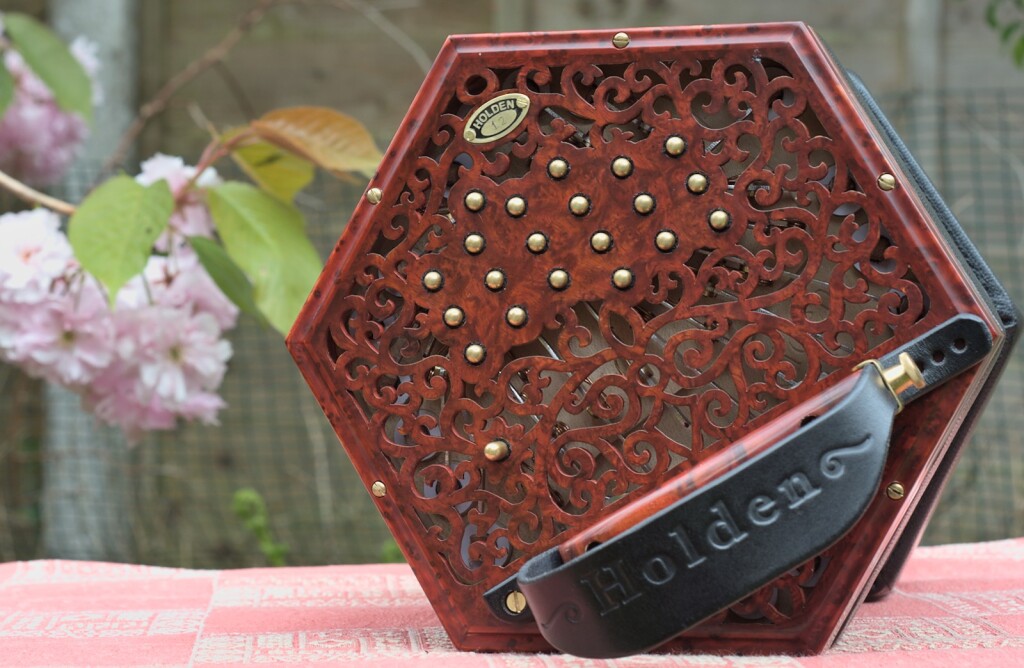 The bottom note (G3) is the same as a violin or a treble English concertina. The top note (D6) is about as high as most players typically play, missing off the very shrill dog-whistle notes you find at the top end of most vintage Maccanns. The fact that the range is symmetrical on both hands was a deliberate ergonomic choice, as is the slightly shifted location of the top D button on each side. The button spacing and row shapes were based approximately on those of a vintage Wheatstone Maccann.

The instrument was tuned in Bradley Lehman’s Bach temperament. My understanding is that it is close to Equal Temperament, but it slightly sweetens the keys close to C major, without introducing the wolf interval that meantone tunings suffer from. This means that all keys are playable, but they have individual ‘flavours’.

Here is a video of my client playing the instrument:

Also, here is an earlier recording of him playing the instrument shortly after he laid hands on it for the first time:

The instrument has 20 notes on each side. Because the low reeds on the left hand are larger than the high reeds on the right, the size of the instrument was determined by how much space the left hand chambers required. I could possibly have made it a little smaller if I had shortened the left hand reed scale or placed one or two chambers in the centre of the pan, but we decided not to compromise the sound or playability of the instrument for the sake of a slight size increase. Putting the same number of chambers on each side instead of a larger number on the right meant I had some unused space on the right hand pan, which helped a bit when it came to designing the right hand action. The overall size of the instrument ended up slightly larger than standard, at 6 3/8″ wide rather than the usual 6 1/4″. 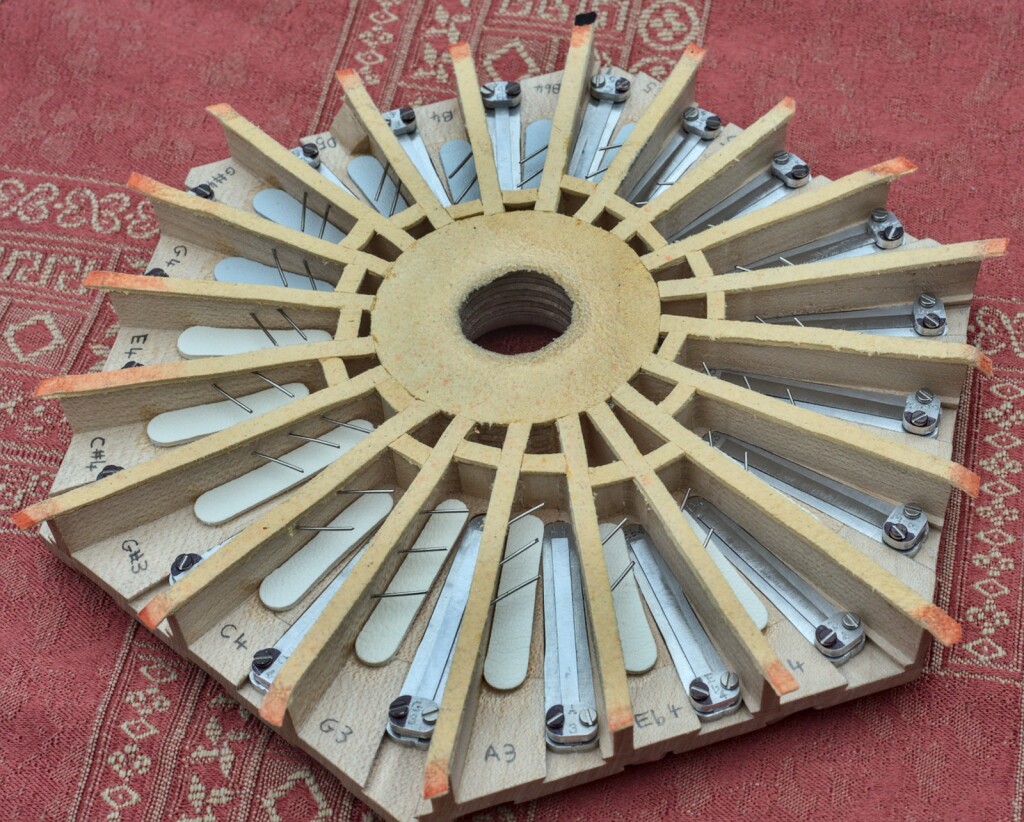 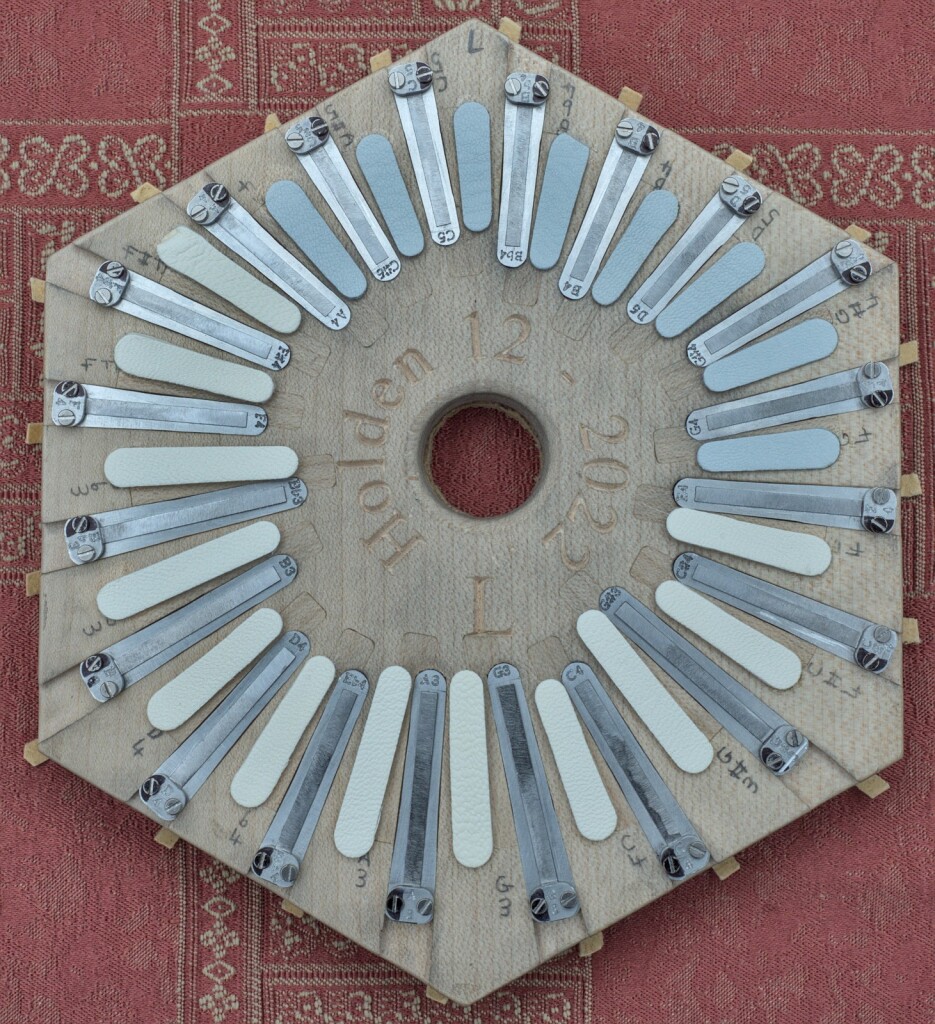 The larger hole in the bottom left of the right hand pan is for the air button passage. 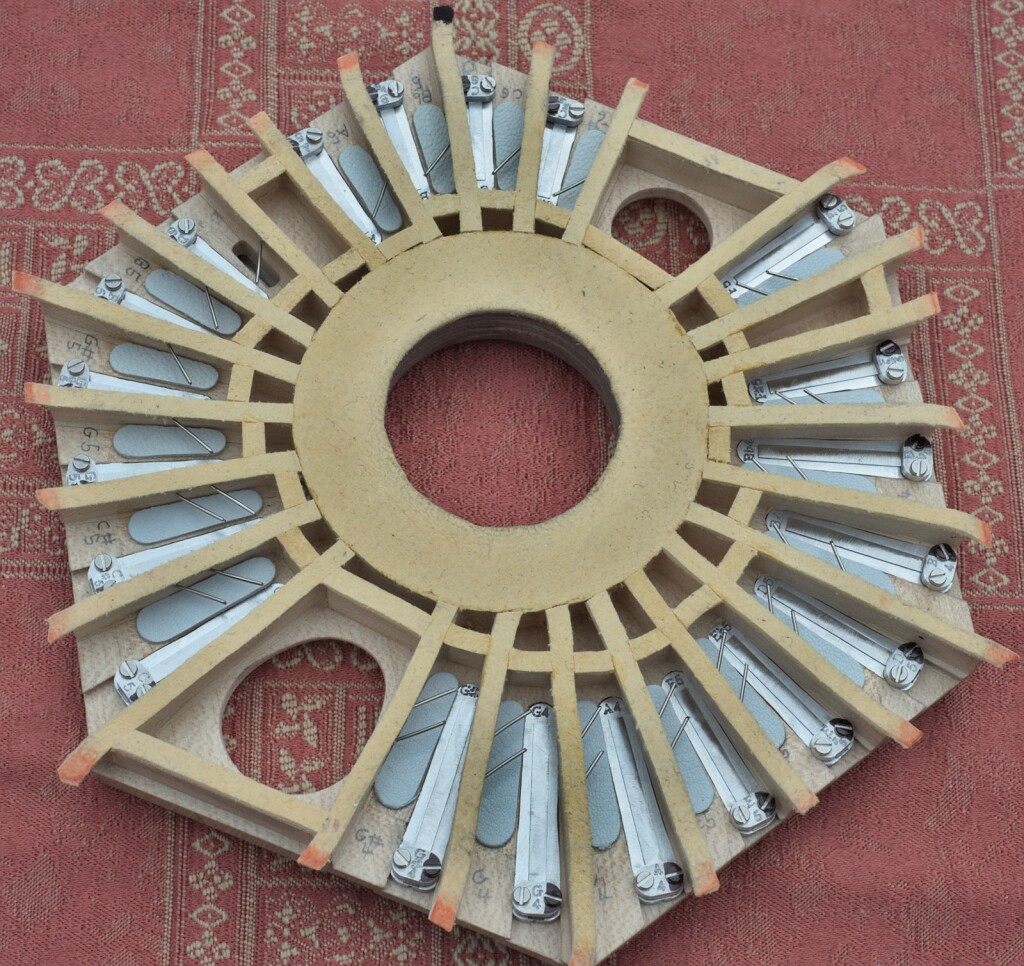 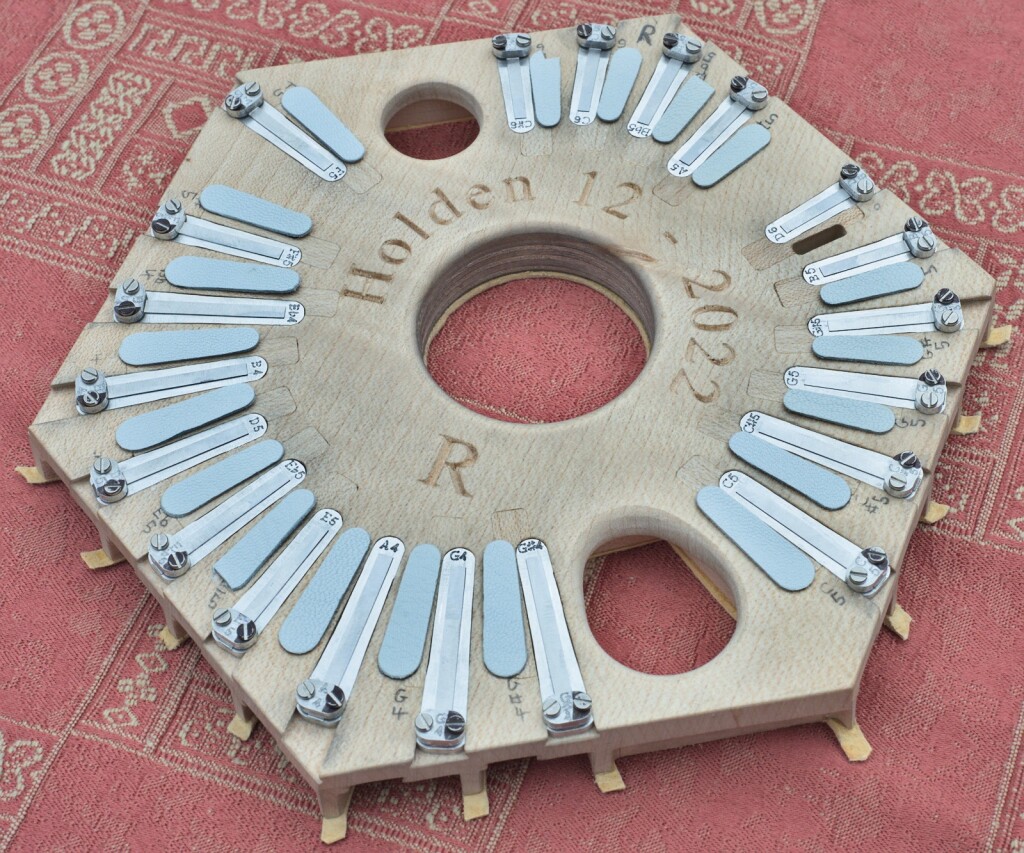 Like No. 10, the instrument has aluminium action levers for weight saving reasons. 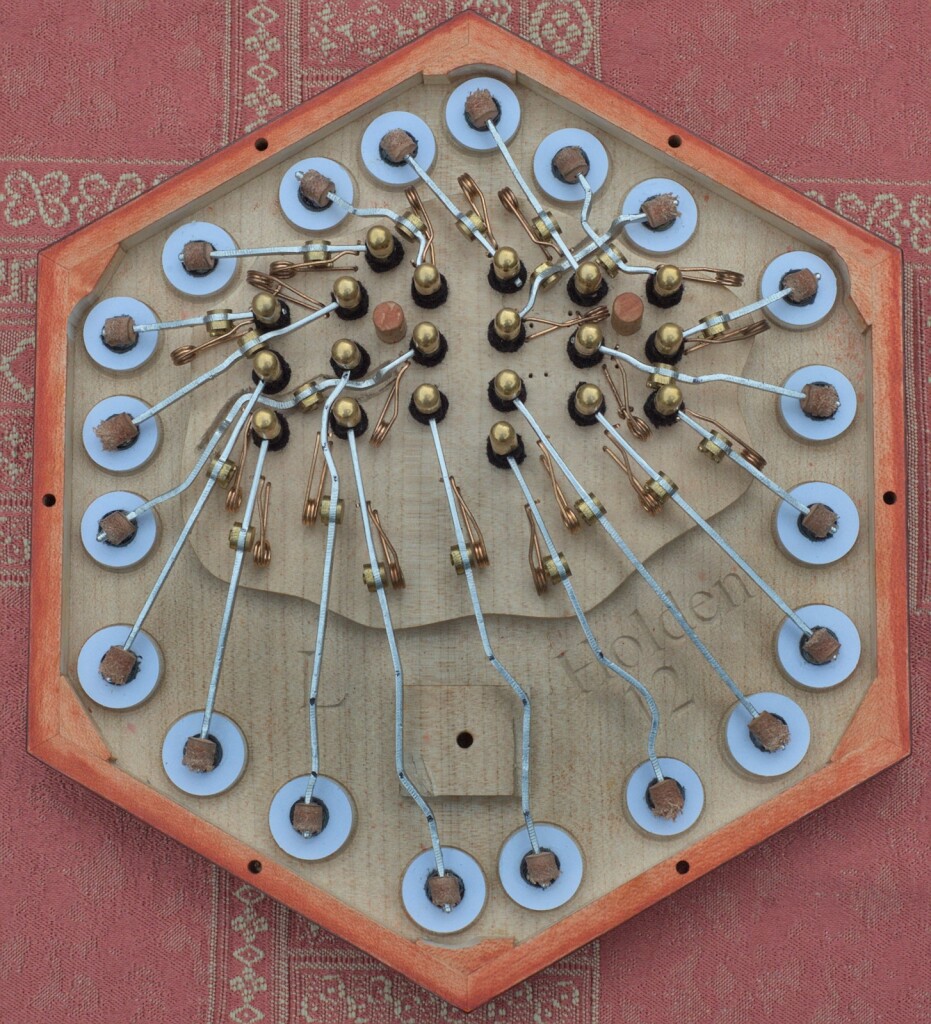 There were a couple of fiddly crossover levers and tricky springs on the left hand due to limited space and the requirement to place the low chambers around the bottom end of the pan. 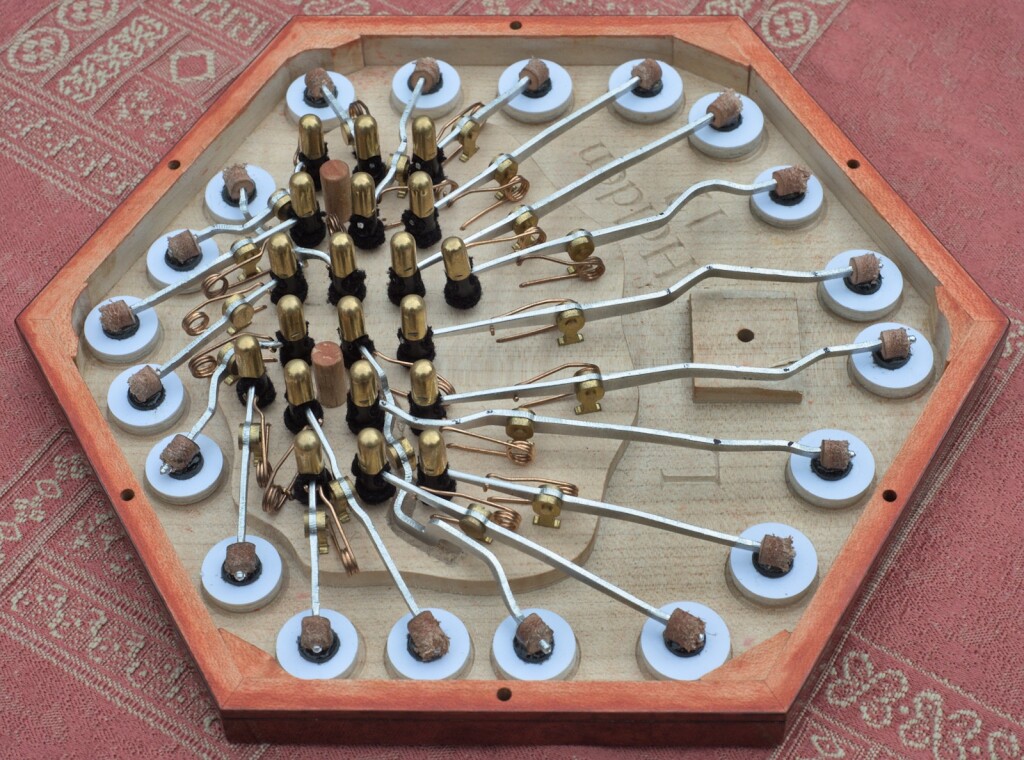 The right hand action was not quite as difficult to build as the left hand because the less-cramped reed pan beneath it let me avoid placing pads in locations that would have been difficult to get a lever to without making it too short. 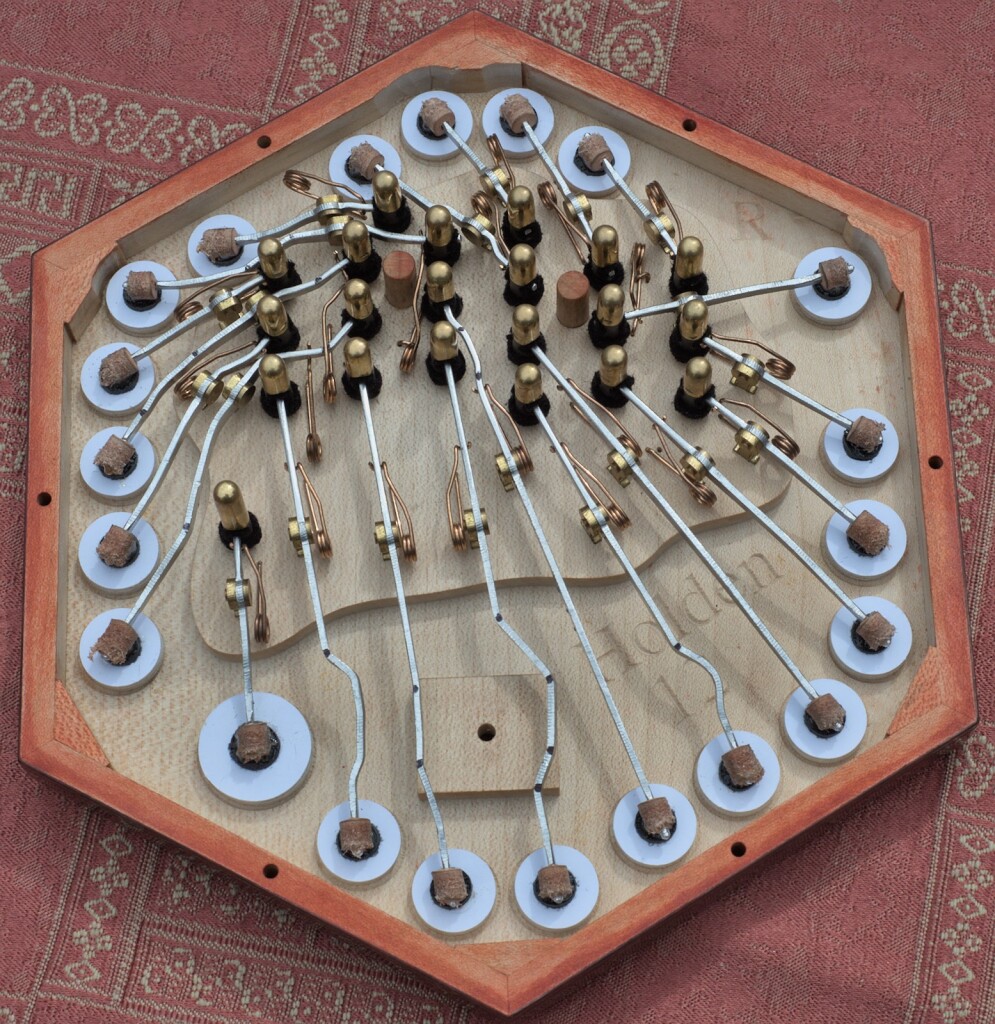 The thumb-operated air pad on this one is 19mm diameter; not as fast as the 24mm air pad I put on my Anglo models, but quite generous for a duet. This is probably my fanciest traditional fretwork pattern yet. 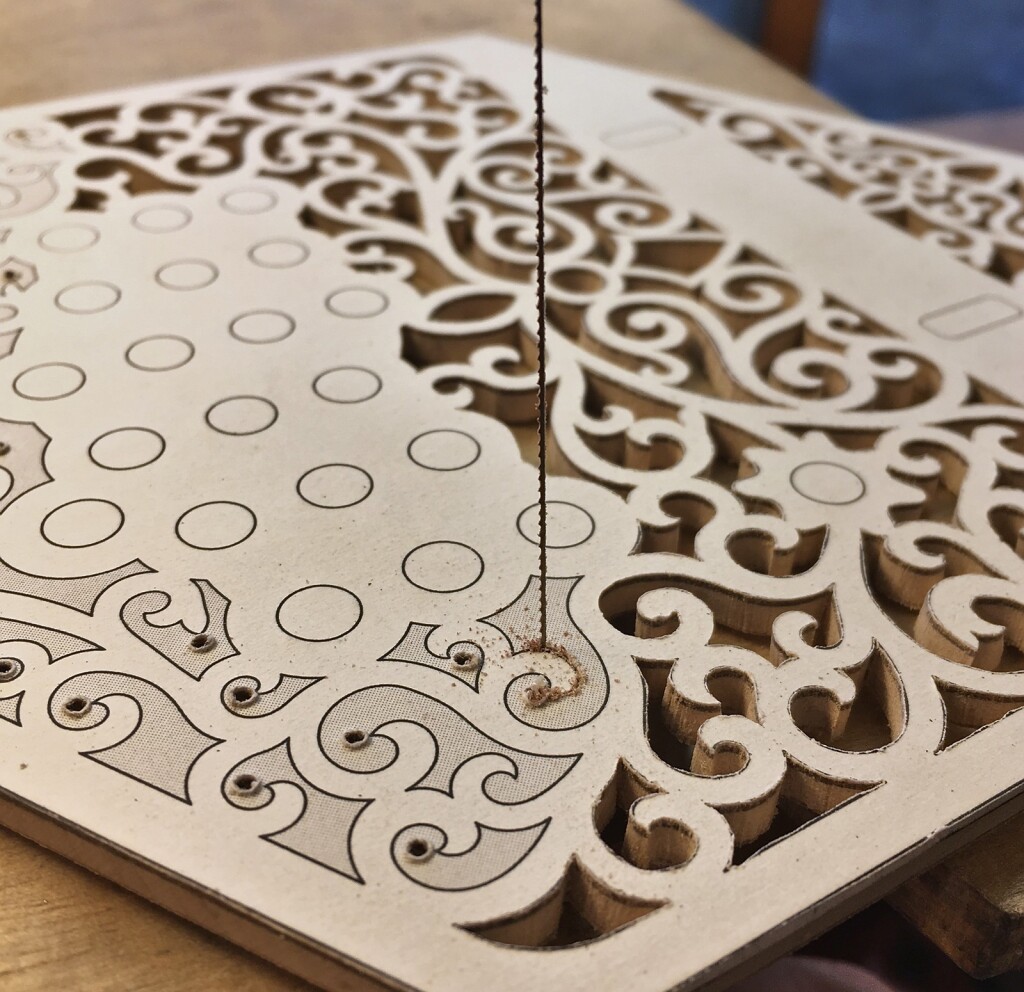 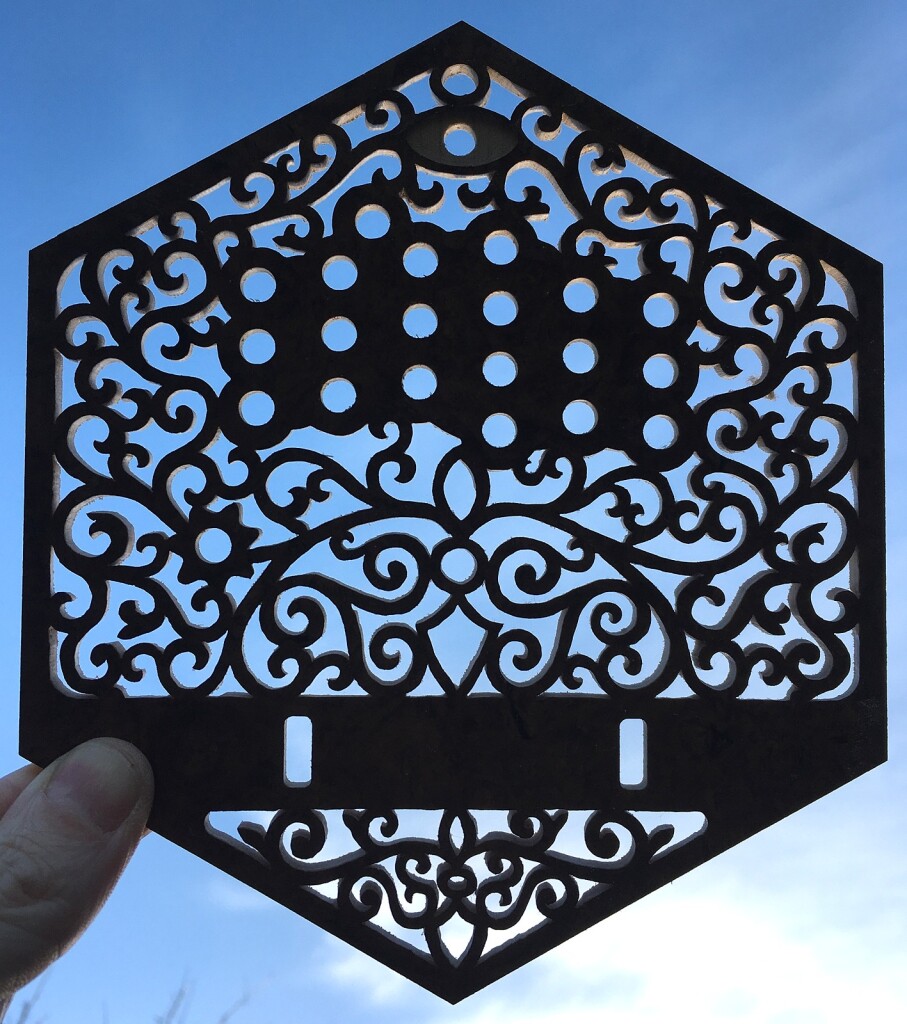 The end plates and sides are both veneered with Amboyna burl. 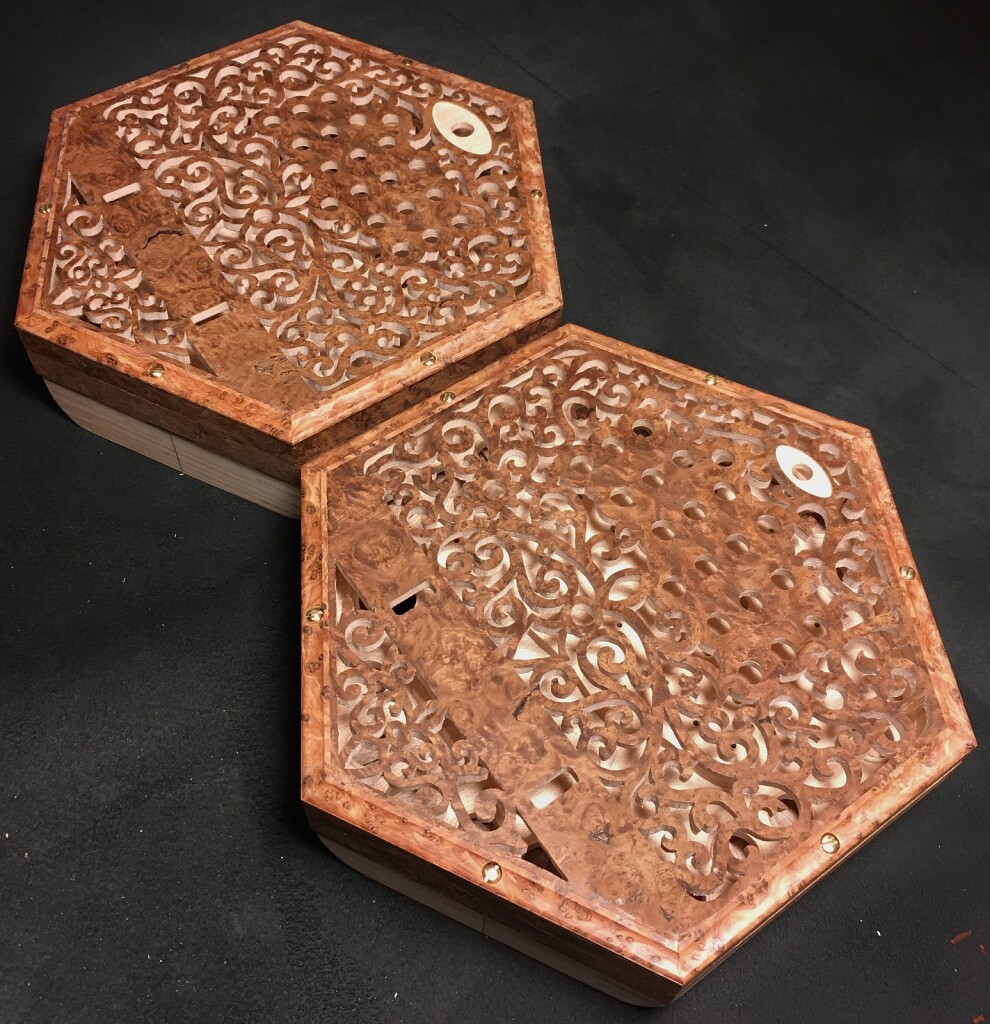 The borders and handrails are made from Thuya burl, which is both expensive and unpleasant to work with. The blocks I bought had a lot of flaws and working around them resulted in more wasted material than I expected. I couldn’t plane it without getting severe tearout, and it is full of sticky resins that instantly clog up sandpaper, particularly in the mini drum sander. The dust has a strong, funky smell too. Months later, the vacuum cleaner in my workshop still fills the air with the scent of freshly-cut Thuya whenever I switch it on. 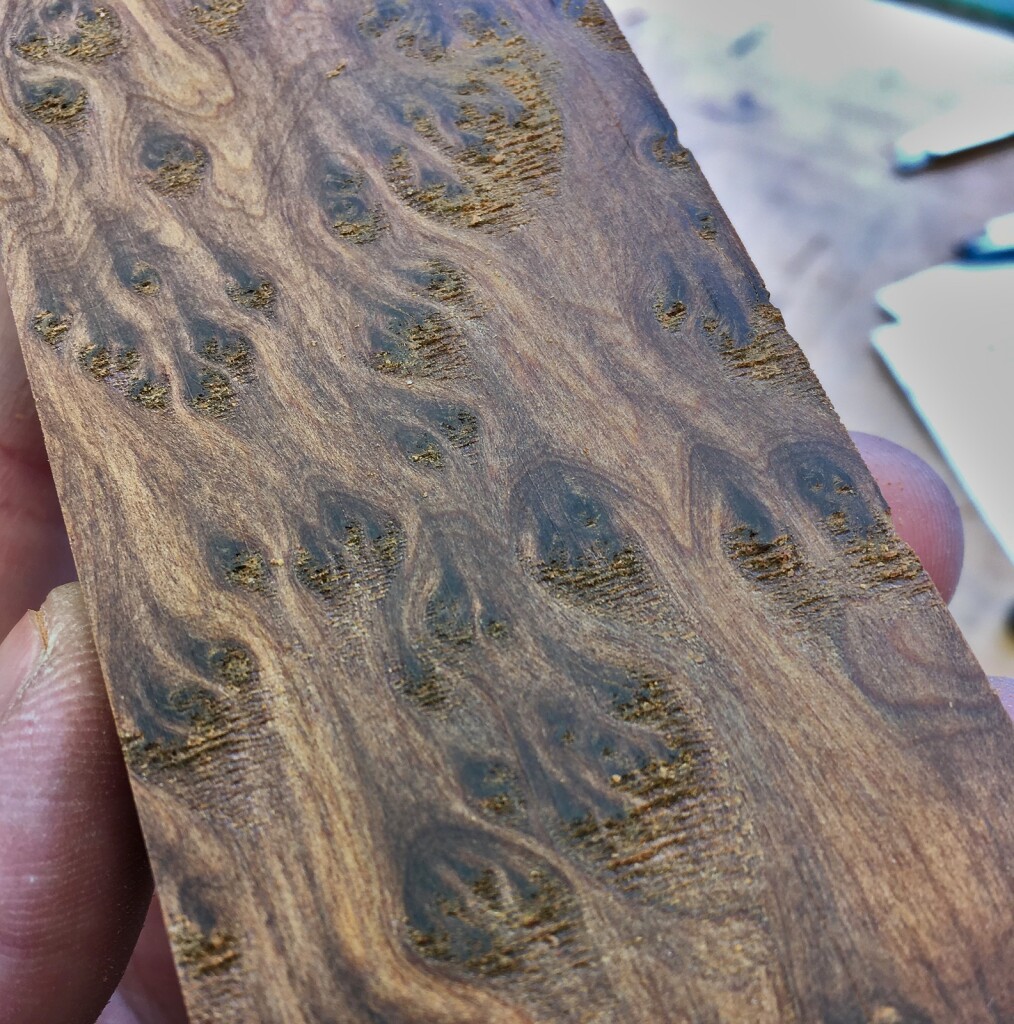 The drum sander paper clogged up after only a couple of passes: 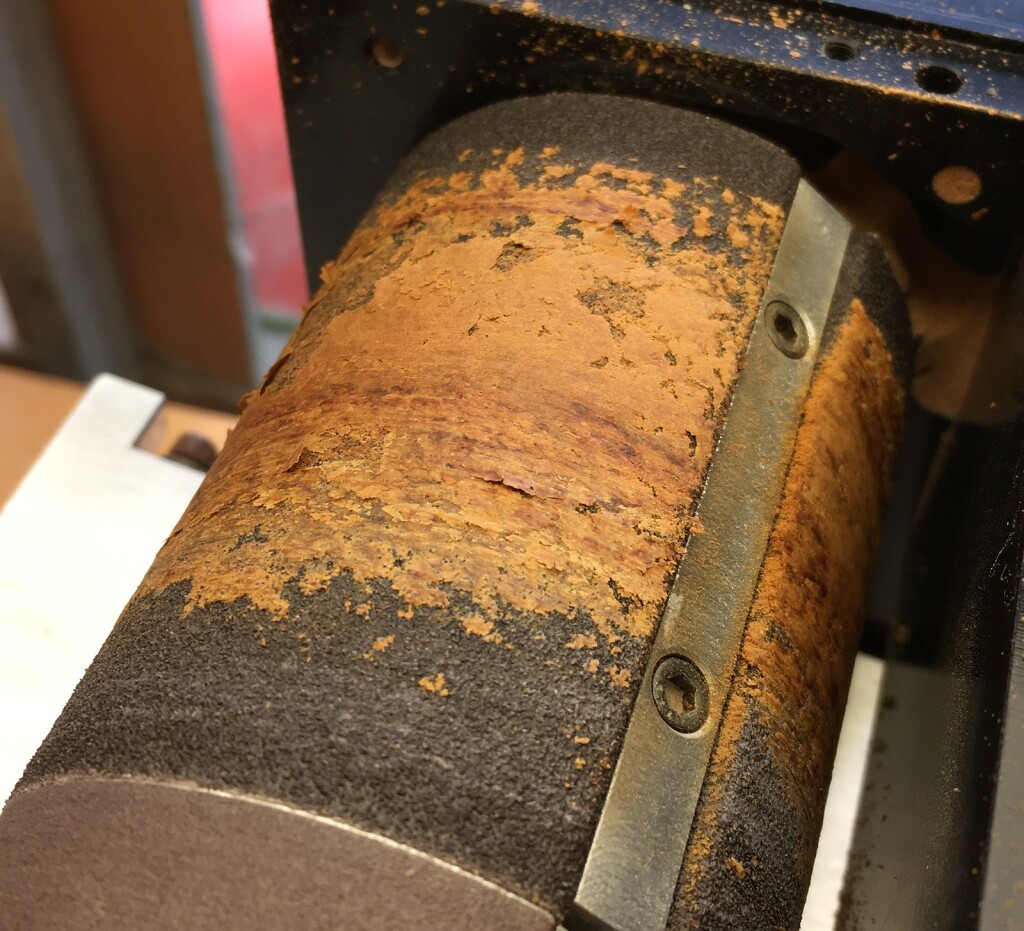 A lot of hand sanding, constantly washing the paper in solvent to prevent the resins clogging it, and I eventually got the hand rails looking very pretty: All the external woodwork is stained dark red and French polished. 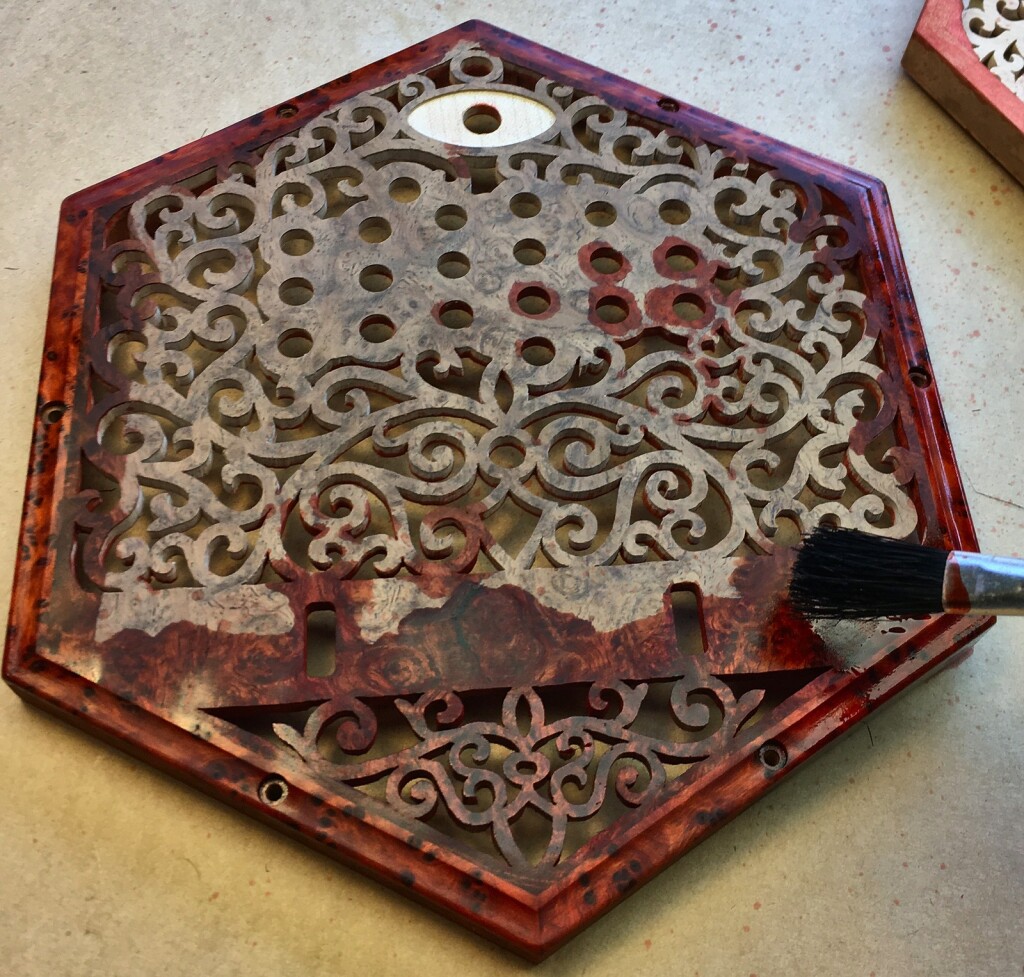 The stain looked a little bright at first, but it toned down quite a bit after polishing. 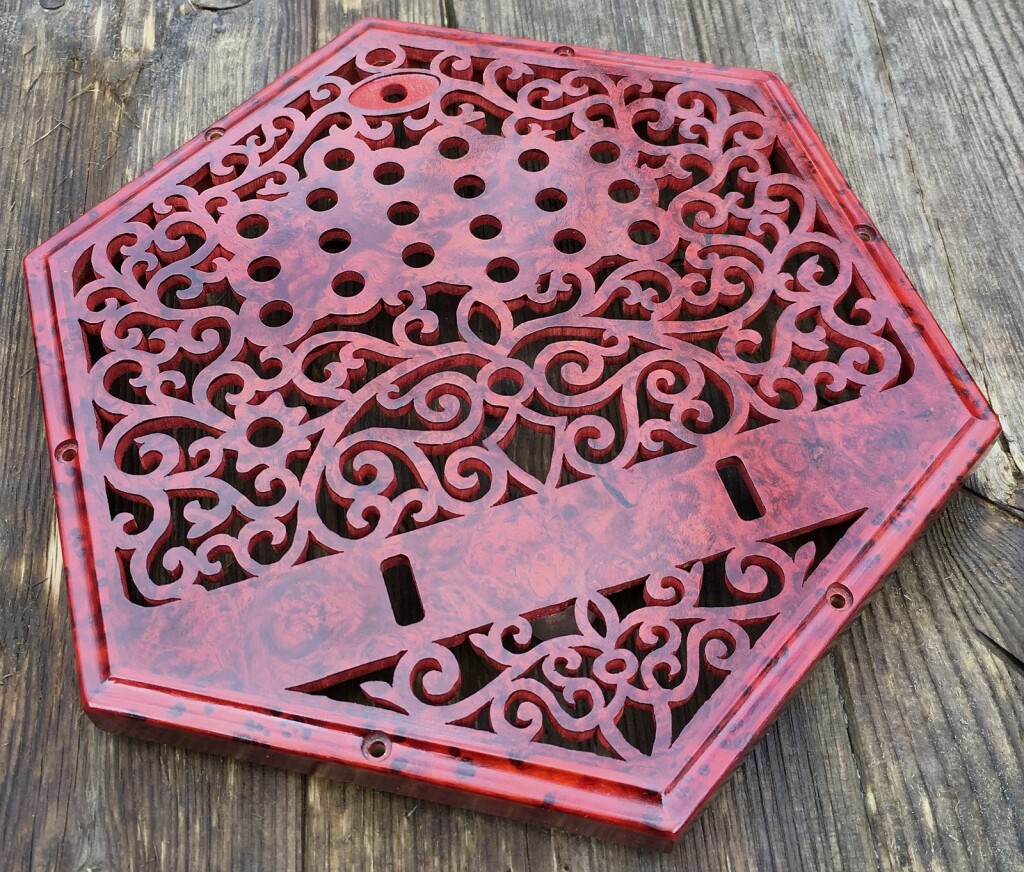 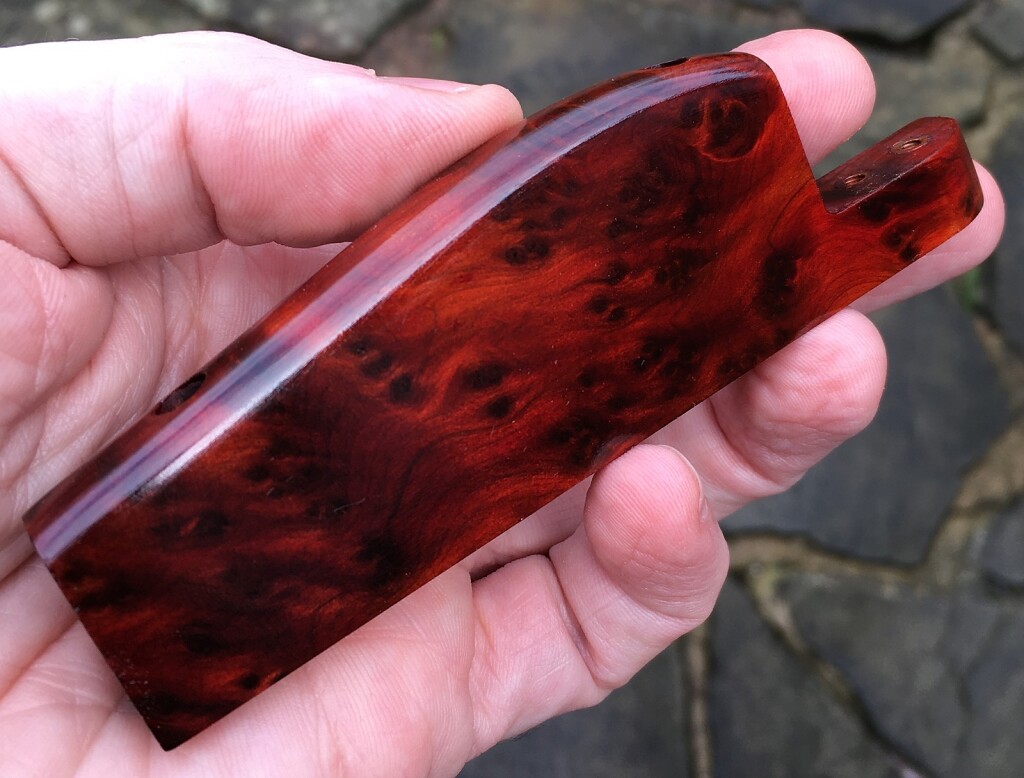 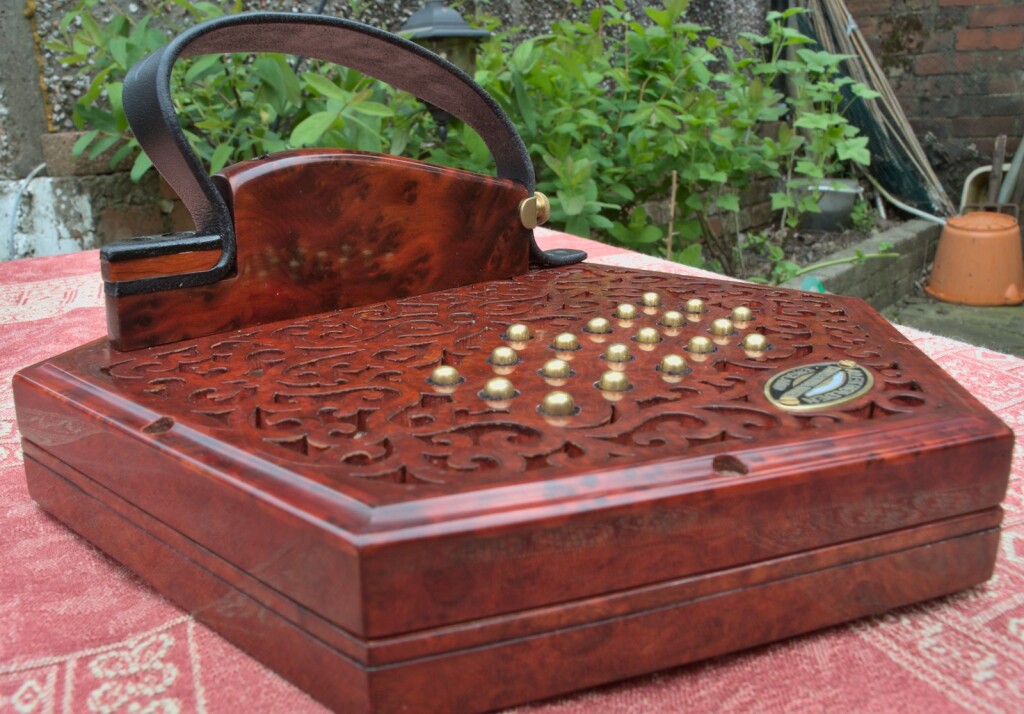 The handrails are attached using two stainless steel M3 screws that pass through from the top of the handrail, through slots in the end plate, to rectangular 3mm thick stainless steel nut plates on the inside that are prevented from rotating by small wood blocks glued either side of them. This allows the hand rail position and angle to be adjusted by just slackening two screws. In order for this to work properly, both ends of the hand strap needed to be screwed to captive nuts glued into the handrail itself. The larger wooden block with a screw hole in it between the two captive nuts is a structural support pillar that strengthens the action box and prevents the end plate flexing when you apply force to the handrail. 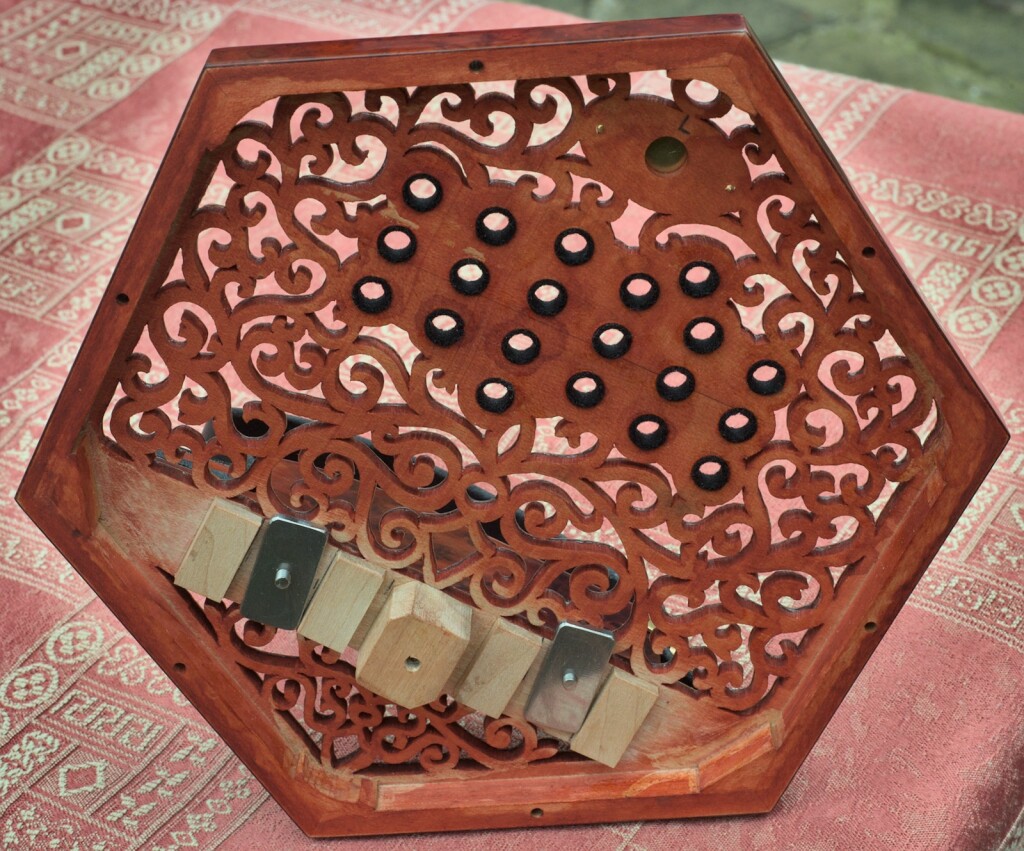 The bellows are plain black goatskin with imitation leather papers. They are nice and supple with a wide usable range. Seven folds is more than adequate for an efficient instrument like this. During testing I found that it could sustain the lowest note for over thirty seconds without changing direction. 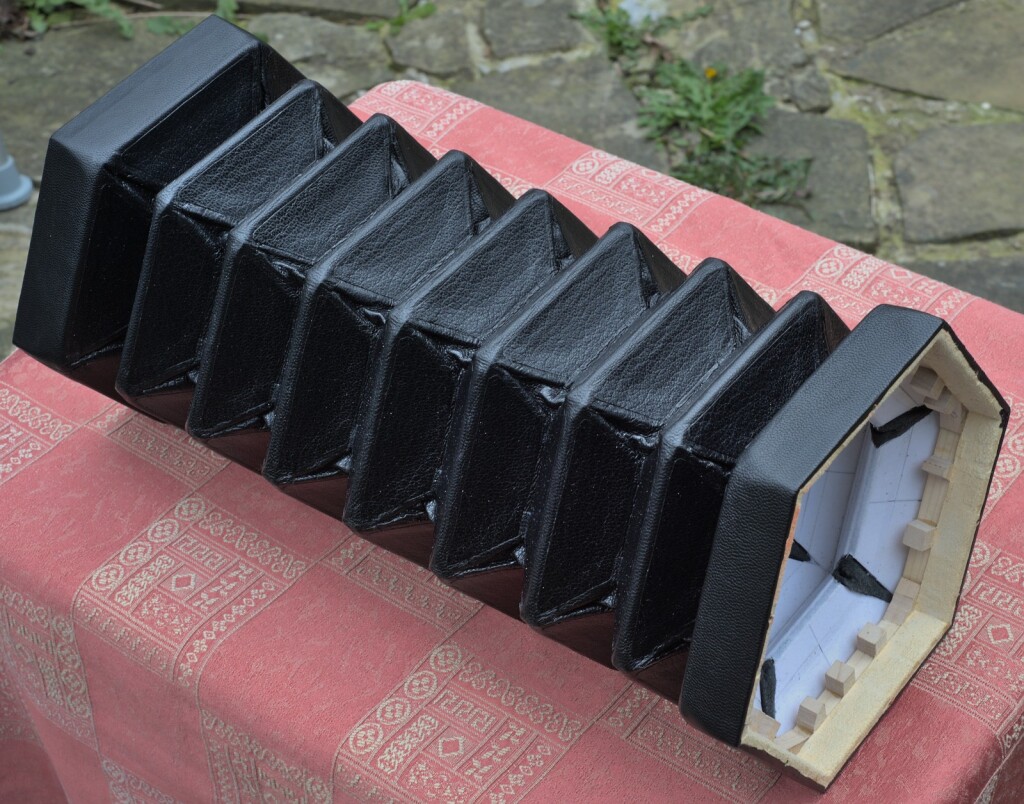 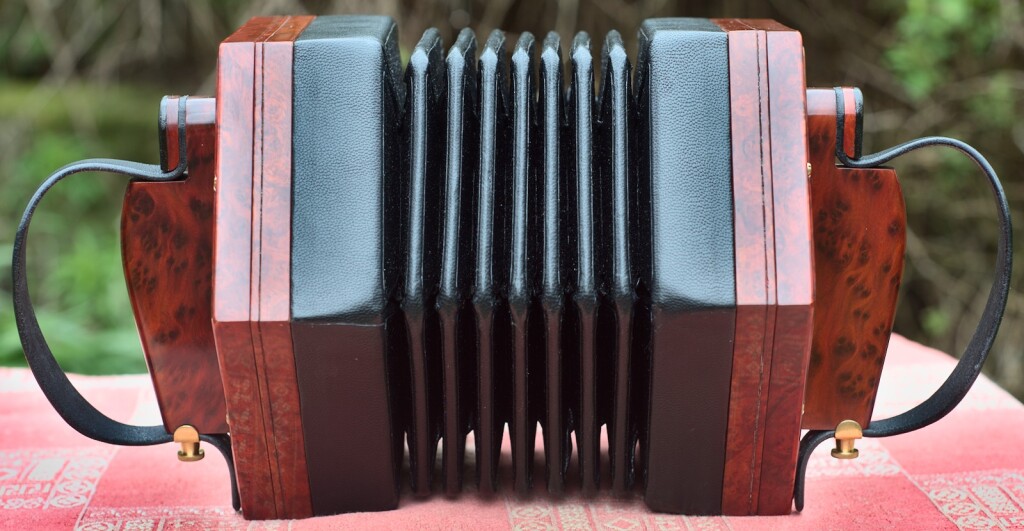