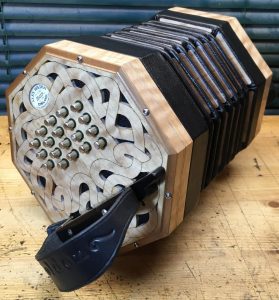 The knotwork-inspired fretwork was designed by the talented illustrator Nina Dietrich. 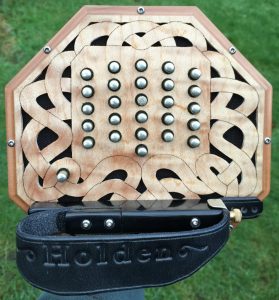 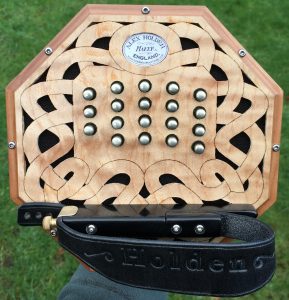 This chart shows the keyboard layout (click to zoom in):

French polishing really brings out the figure in the rippled maple veneer. Unfortunately a static photo can never fully do it justice. It shows off a beautiful three dimensional effect as you move it around in the light. 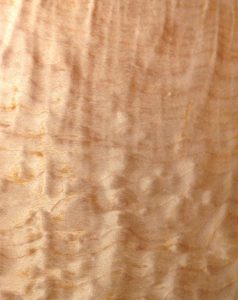 I used pyrography (wood burning) with a very fine tip to mark the lines on the wood that give the design its 3D knotwork effect. The trickiest part was transferring the design onto the ends in pencil first, while making sure I didn’t weave under when I was supposed to weave over or vice versa! 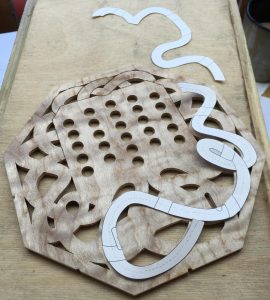 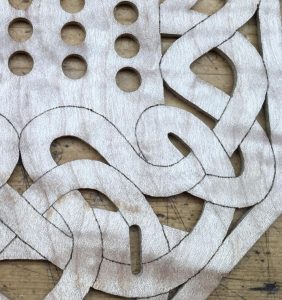 In order to reduce the weight of the instrument I made the reed frames from 6082-T6 aluminium instead of brass, and also reduced the thickness of some of the wooden parts and further optimised the shape of the action levers. The total weight came to 1135 grammes; less than Holden No. 3, which had 28 fewer reeds. This did cause some manufacturing challenges; I had a lot of difficulty machining the reed frame blanks without breaking end mills before I found a set of parameters that worked reliably. In my opinion good quality aluminium-framed reeds are no easier or quicker to make than brass and can sound just as good. It may be possible to get slightly greater maximum volume from brass frames (both of equally high quality) due to their extra stiffness and mass, but I don’t think there is a big difference and you are unlikely to notice it when playing at low to moderate volume. I certainly wouldn’t call the use of aluminium frames an ‘economy’ or lower quality option, and if you want a lighter weight instrument it is an option worth considering. 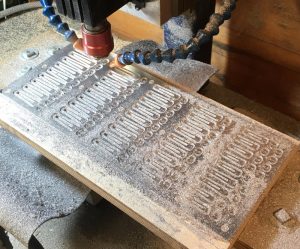 It was quite a challenge to fit all the necessary reed chambers into the reed pans. Not only did I include three more buttons (+ air) than vintage Crane duets of this width normally had (42 buttons without an air button was standard for a 6 ¼” wide hexagonal instrument I believe), but going up from six to eight sides paradoxically reduces the available internal space by a not inconsiderable amount. I had to use a radial arrangement, put two chambers and the air passage in the middle of the pan on the right hand side, and really pack them close together. I also used a shorter scale than I did on No. 2 and made the frames skinnier and the dividing walls thinner. 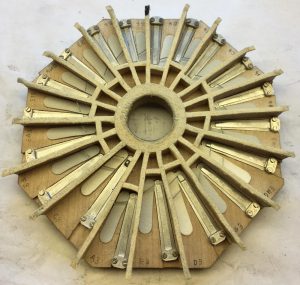 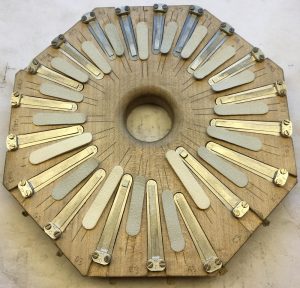 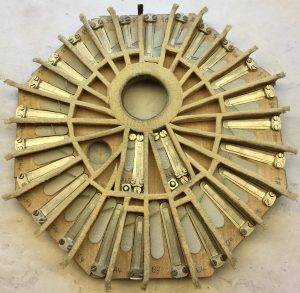 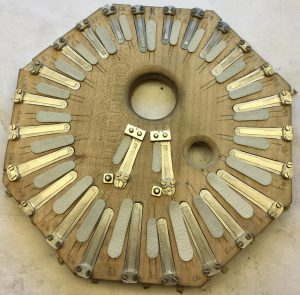 The left hand action wasn’t too tricky, but the right hand was very challenging and required some creative spring-making. 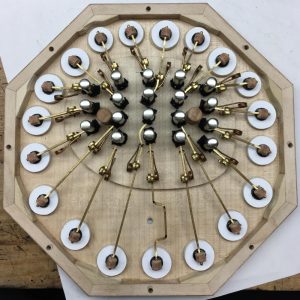 The surface of the middle button on the right hand side was subtly textured to make it easier to locate your position on the keyboard by touch. 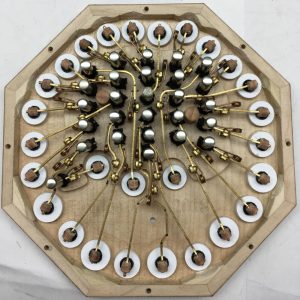 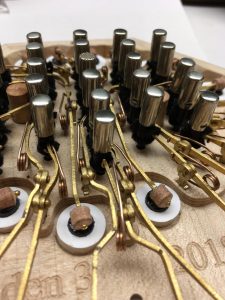 I continue to get better at bellows making with each set I make, and this was probably my best set yet. They feel supple yet firm (if that isn’t too much of an oxymoron), and I am happy with their cosmetic appearance. A novel aspect is that the client provided me with custom-designed papers based on a photograph of one of the end plate veneers. 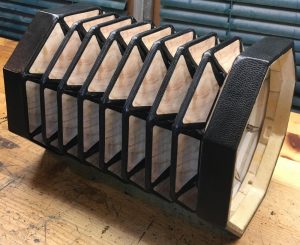 An unusual feature of the instrument is that both handrails can be adjusted south from their standard location by about ½”. This necessitated some changes to the way the handrails were mounted and a new strap clamping method. It looks a bit unorthodox but it works well and felt comfortable and secure to me. I have also located a source of more supple (but non-stretchy) strap leather. 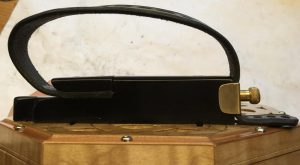 Incidentally, if you look closely on this picture, it nicely shows off the mirror finish on the French polished Ebano handrails. 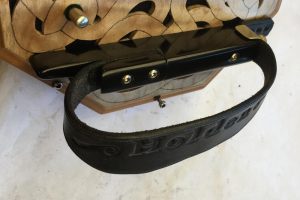 I custom-dyed some wool cloth a deep forest green for the button end bushes. It almost looks black unless the light catches it the right way. 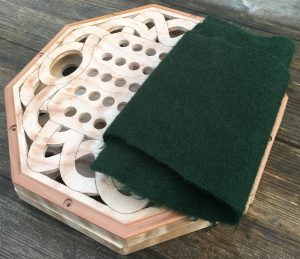 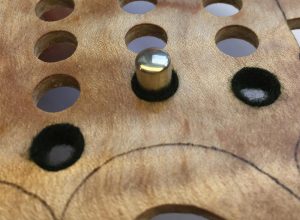 Here is a quick video clip of my client testing out his new instrument before taking it home:

I have switched to a better quality hard case, made in Italy. I also fitted four custom-sized internal corner blocks padded with felt and upholstered with silk velvet to hold the instrument very snugly, keeping the bellows compressed evenly and preventing the instrument from rattling around in transit. 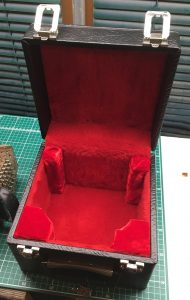 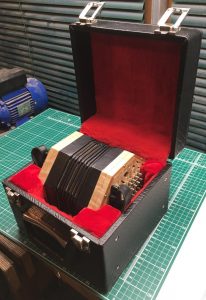 This was my most complicated and difficult build so far, particularly due to the density of the right hand side, and the build had quite a few ups and downs and new learning opportunities. I am very pleased with how it turned out in the end. My next instrument will also be a Crane duet, but with six sides, more traditional appearance, and a slightly different button selection.