It has been a long and at times bumpy journey with a successful arrival at the end. I have produced a good quality, attractive, playable instrument, where I made every part myself except the reed clamp screws and end bolts. I have learned or improved many skills along the way: CNC, toolmaking, metalwork, woodwork, leatherwork, French polishing, tuning, and so on. Where I made mistakes along the way, I have learned from them, and I am certain #2 is going to be even better. The instrument is currently away being evaluated by an expert and I have already heard some encouraging feedback. Hopefully at some point I will be able to post links to reviews and videos of it being played. 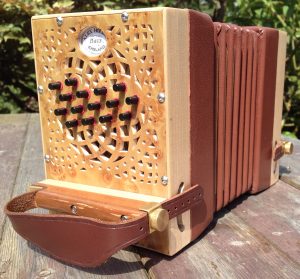 What’s next? I am in the early stages of designing and tooling up to make a pair of new instruments, both of them fairly traditional 6 ¼” hexagonal Anglos, one with wooden ends and one with metal ends. A bit further down the road I have plans for a larger and more ambitious Hayden duet. I am also taking on more repair work: having made a complete instrument from scratch, I am now well-equipped to take on any aspect of fixing a traditional vintage instrument.