I’m in the early stages of designing a logo for Holden Concertinas that will also be used as the maker’s label on my instruments, and I mentioned to a friend that I was considering including the phrase “Hand crafted in England.” I intended that phrase to put across concepts like small production quantities, hand assembly, care and attention to detail, tradition, built by an individual who really cares about the end product. In other words the opposite of “Mass produced on an assembly line in China.” My friend pointed out that hand crafted may be a controversial claim to make because I am intending to use CNC machine tools to produce some of the parts for my concertinas. I wondered whether I would be safe if I dropped the word hand, e.g. “Crafted with Care in England” or similar, though I’m uncertain if that is any better (and it doesn’t sound as good to my ear).

Since then I’ve been thinking about what the word craft and the term hand crafted mean to me and reading other opinions on the subject. I came across an interesting essay this morning about the ongoing debate over the meaning of the marketing term craft whisky (apparently there is such a thing – I had never heard of it) that made me question whether I can use the term craft at all when I am only just starting out in the business of musical instrument making. After all I certainly wouldn’t dare to call myself a master craftsman at such an early stage in the development of my new career, though neither would I say that I am completely inexperienced or lacking in craft skills (including the use of traditional hand tools).

In the case of my concertina-making operation I will be assembling all the parts and tuning and finishing the instruments by hand. A fair amount of skill will be required and little or no use of power tools, so I think this part of the process certainly ought to count as hand craft.

What about the parts that I will be assembling? Most of the screws and the action rivets I will probably buy ready-made because they are so generic that there would be little point to making them myself. The rest of the parts I intend to make in my own workshop, with the possible exception of laser-cut metal end plates (a machine powerful enough to do that kind of work is far outside my budget). The raw materials I’ll be making the parts from will be things like seasoned hardwood, brass sheet, spring steel strip, various kinds of tanned leather, card stock, wool felt, hide glue, shellac. That is to say, pretty much the same types of raw material that traditional concertina makers like Wheatstone and Lachenal used back in Victorian times (though I don’t intend to use bone, ivory or endangered woods, and may also use make some use of more modern materials and adhesives when appropriate). The tools I will be using to make the parts can be divided into four categories:

Enough rambling. I’d like to know what you think. Will my concertinas be crafted or merely made? Is it valid to describe them as hand crafted if some of the parts in them were machined by power tools and even robots?

Not much progress on the bellpush over the past week because most of my attention has been focussed on another non-concertina-related project. Yesterday was a day off though, so in the evening I managed to stop thinking about the other project for long enough to tackle the problem of the spring that provides the button resistance.

My original plan had been to use a single strip of brass as both the button spring and one of the switch conductors. This turned out to be impractical though because the button has a vertical travel of 5mm and there isn’t enough room inside the box (once you’ve allowed room for mounting screws and electrical screw terminals and things) for a really long spring strip. A short strip probably wouldn’t be able to flex by 5mm without permanently deforming and even if it could, it would likely result in fatigue failure before long. I experimented with folding a brass strip back and forth in a zig zag to increase its effective length, but it looked like it would take up far too much space and probably still wouldn’t work very well.

So the solution I eventually came up with was to separate the two functions. Make a concertina-style spring from coiled phosphor bronze wire with 5mm travel, and a separate brass strip switch that only has to move by 1mm or less at the bottom of the button travel. I haven’t yet made the switch but I have made the spring. It took me four attempts before I developed a shape I was happy with, using a hole in a block of scrap wood as a test rig. It has more turns than a standard concertina spring because of the large amount of movement relative to its length. 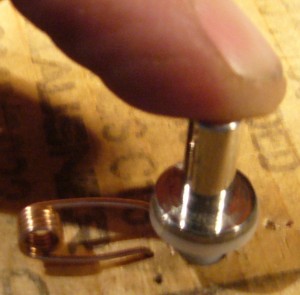 Here it is installed in a recess chiselled into the back box. It’s in a slightly weird location because of where I intend to put the mounting screws and switch contacts: 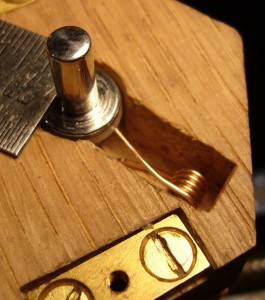 I won’t bother posting a photo with the top installed because it doesn’t look any different on the outside! The action feels pretty nice though.