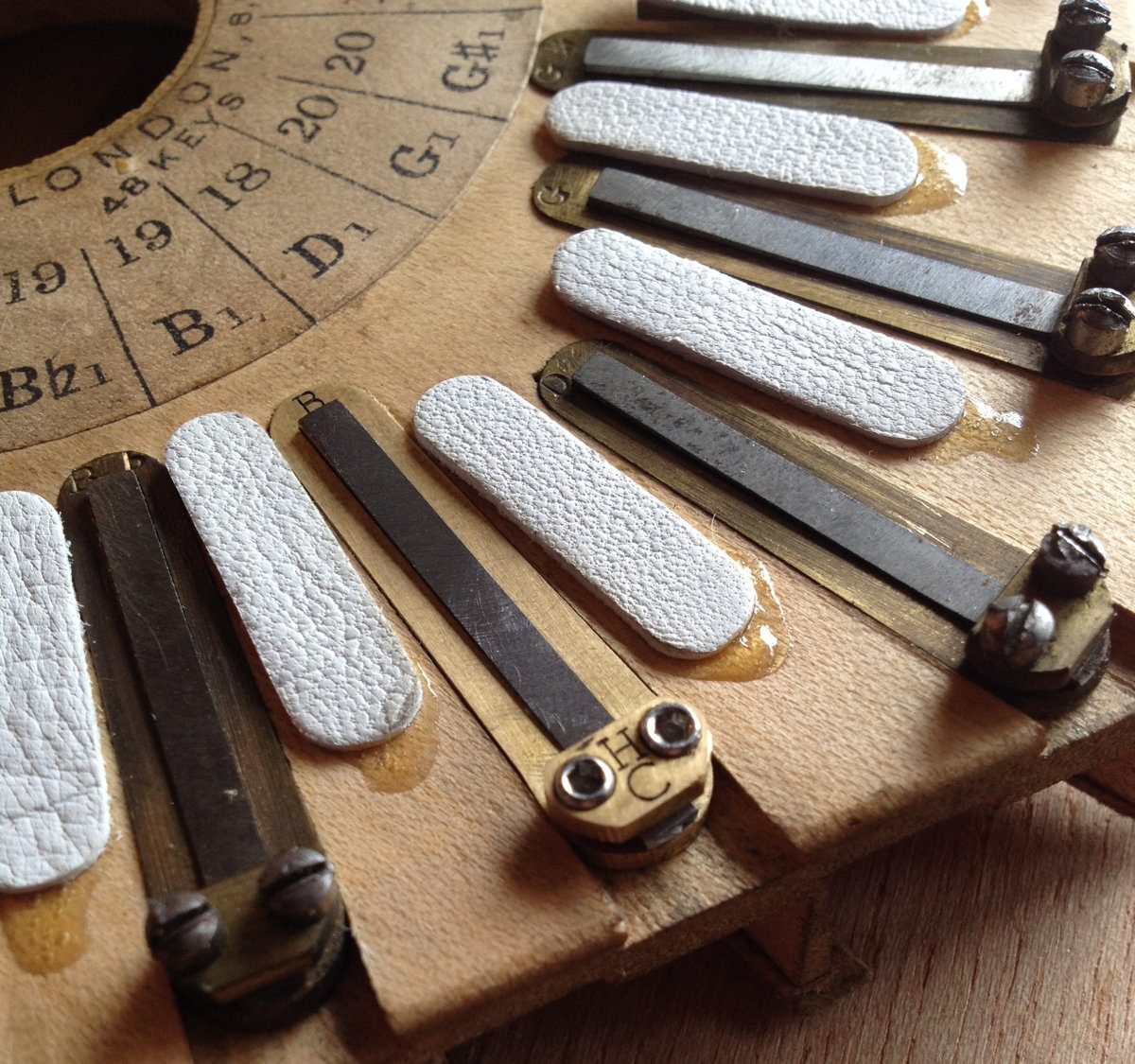 The way a free reed works is that a tongue made from a springy material (usually spring steel or brass) is made to oscillate through a close-fitting window in a metal frame by the flow of air through the reed. Each time the tongue passes through the tight part of the frame it briefly interrupts the air flow. This regular chopping-up of the air flow produces a tone with a significant harmonic content (it’s a long way from being a pure sine wave).

I’m using hardened spring steel for my reeds (IIRC it was 0.8mm thick on this size of reed), which I found practically impossible to cut with hand shears, so I bought an old bench shear on eBay. I got it cheap because it was seized up with rust and the blades were blunt and dented, but it is a nice heavy-duty machine: 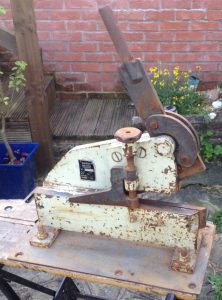 After restoration, it works really well (though it would be nice to have an extension tube on the handle): 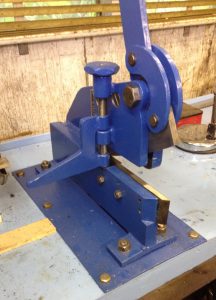 I need to come up with a better way of cutting the strips consistently to the right width. To complicate matters, they are slightly tapered. Initially I scribed them and lined them up under the blade by eye, which worked better than I expected but was rather fiddly and time-consuming. 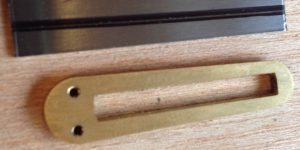 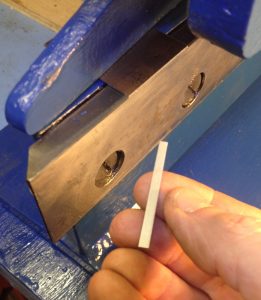 The shearing action bent the tongue slightly so I straightened it before doing any more work on it: 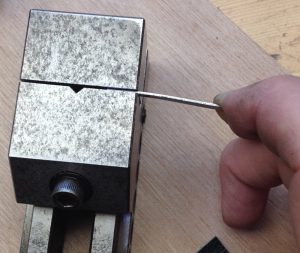 Next I cleaned up the edges by draw-filing while it was held in a toolmakers vice: 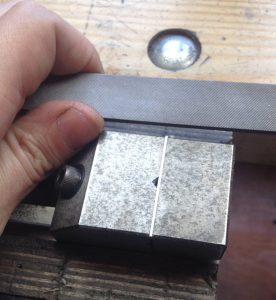 It’s important to make the tongue a very close fit in the frame, but not so tight that it’s prone to catching if the reed pan expands and presses on the sides of the frame: 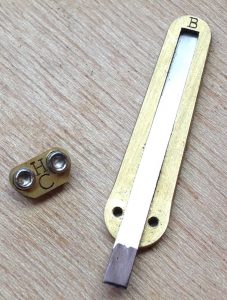 A low-power back-lit stereo microscope is a big help with fitting the tongue to the frame. Although the gap looks off-centre in this picture, that’s because you’re only seeing the view from the right eyepiece. 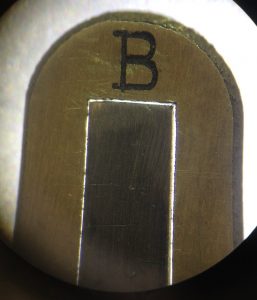 In a concertina, the tongues are usually not a consistent thickness along their length: they are profiled so as to bring the pitch up or down and to balance the volume of the reeds across the range of the instrument. Because I don’t fully understand all the parameters yet, I decided to start out by copying the profiles of the reeds in an antique instrument. I took the tongue I was copying out of its frame and measured it in several places with a point micrometer (I found it wasn’t difficult to put it back in the same place, and it still produced the same pitch afterwards). 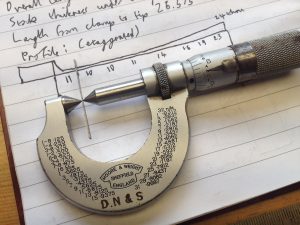 I did the profiling by hand using a triangular Bahco saw file and an Eclipse hand vice, on top of an oak block with a shallow step cut into it. You can tell roughly what pitch you are at by ‘pinging’ it. I found, at least with this size of reed, that it is very easy to take a hair too much thickness off the belly area and the pitch suddenly drops by a couple of semitones. You can bring it back up by taking a lot of thickness off the tip, but then you have a weak reed that sounds slightly odd.

After clamping the profiled reed into the frame, you have an extra bit of tongue sticking out of the back of the reed that needs to be removed (you deliberately shear the tongue too long so you have something to grip while profiling and fitting it). Because it is hardened steel, the extra bit is very easy to break off, and the fact that the clamp doesn’t quite reach the end of the frame means that the sharp stub doesn’t stick out significantly past the end of the reed:

Here I am doing the initial rough-tuning of the reed before trying it in the instrument. Note that removing some metal from the belly (using a 600 grit diamond needle file) caused the set of the tongue to alter, i.e. the tip bent down slightly. This caused the reed to choke the second time I tried to sound it. There needs to be a slight gap between the tongue and frame when it’s at rest or no air will flow through it and it won’t start oscillating by itself.

From left to right, we have the original antique Lachenal reed I was copying, my first working reed (using the best of the aluminium frames), and my first brass-framed reed: 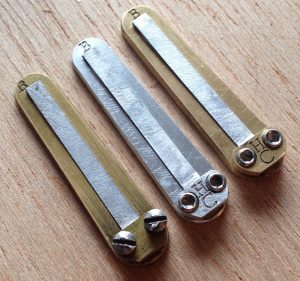 My first brass reed in the instrument: 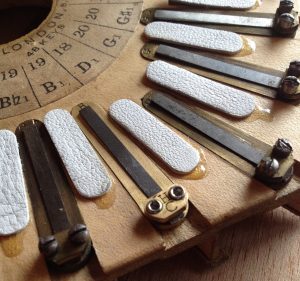 The profiling of this first reed isn’t a perfect copy of the original: rather than being a smooth curve from the belly up to the tip, the profile curves up too sharply and then plateaus before the tip. The effect of this is that although the pitch is right and the dynamic range seems OK, the tone has less upper harmonics. When I compare it in the instrument to the original reed next to it, it sounds ‘softer’ with less of the piercing ringing overtones of the original. I suspect this is because most of the bending action is happening near the clamp rather than spread out along the full length of the tongue. Something to work on improving in my next prototype!