I like to sharpen my cutting tools, particularly the ones I use for wood carving. Actually that’s not entirely accurate; I prefer to carve with tools that are extremely sharp, which meant I had to learn how to sharpen them. I also often sharpen cooking knives, axes, chisels, hand plane irons, scissors, and for the concertina work I’ll need to be able to put a really good edge on leather skiving knives and possibly gravers.

Until now what I have tended to do is to sharpen tools on a fine India oilstone, which leaves a sharp but slightly rough edge, and then hone/polish them using a rotary electric polishing machine. That does sort of work, but because the wheel is flexible it tends to round off the edge at a microscopic level, dulling it slightly in the process. I recently went looking for a better solution and, after a lot of research, decided I liked the sound of the Belgian Blue whetstone. A letter was written to  my parents, and as a result I found one in my Christmas stocking.

The Belgian Blue is a natural abrasive stone that is similar to, and found right next to, the famous Ardennes Coticule. It is less aggressive than the coticule, but it apparently produces practically the same finish and because it is much more abundant and found in larger pieces it is merely quite expensive rather than astonishingly expensive. It is a pretty purplish slate with red mottling: 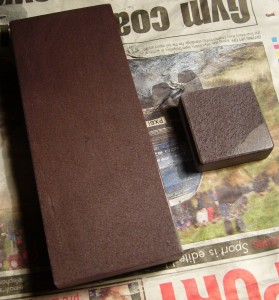 You can’t really see it in the photo, but it glitters subtly. This is because embedded throughout the slate are millions of microscopic garnets, which are very hard crystals. You can simply wet the surface of the stone and rub your knife on it in the usual way and it will slowly polish the metal, though it is much more effective if you first rub the smaller stone (known as a slurry stone) over the surface, which generates a pinkish abrasive slurry: 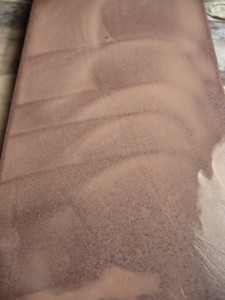 The Belgian Blue isn’t aggressive enough to sharpen a blunt edge in a reasonable timescale. You need something coarser to do that. What it’s good for is going from a rough but sharp edge to the next level: a smooth, shaving-sharp edge: 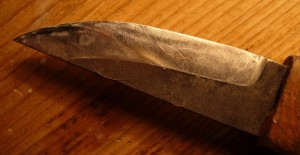 It should also be good for touching up edges that have gone a bit dull (too much to fix by simply stropping on leather) but aren’t damaged or blunt enough to need a lot of metal removing with a coarser stone.